How do you squeeze creativity into a box on a page? 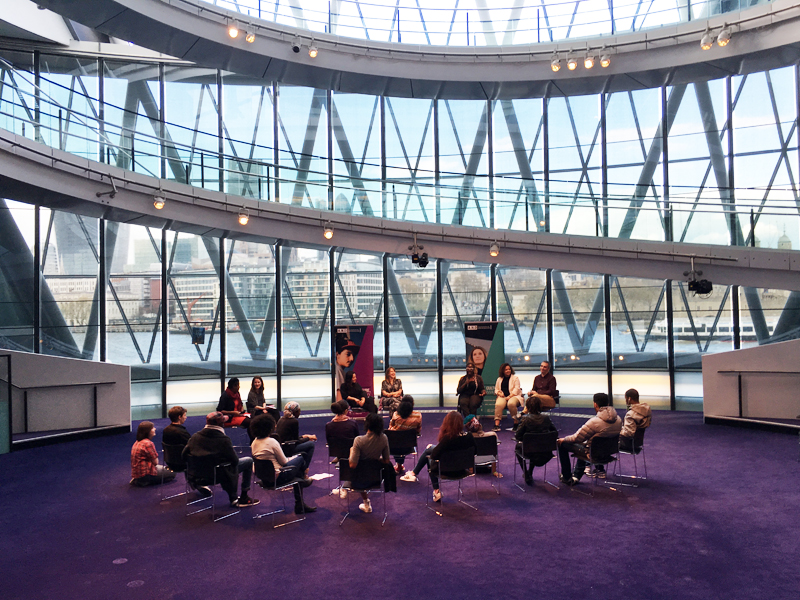 We met up with three of The Young Challenge Group (the London Cultural Education Challenge’s youth advisory panel) on a sunny afternoon in a wood-panelled coffeehouse in Bloomsbury, two minutes from Russell Square, a stone’s throw from the British Museum, and crucially, around the corner from the offices of Arts Council England.

“How are we supposed to squeeze our ideas into a box on a page? How can our creative intentions tick boxes in a marking criteria?” Asked one – a burgeoning performer and long-time member of the group. Another, having just finished a degree that looks at urban regeneration in west London, wondered how the Arts Council sees its role in the continual reshaping of London.

The group had been invited to visit the offices by Adam Jeanes, A New Direction’s relationship manager, to get a sense of the main funder of the Challenge programme, and potentially, a future funder of their own work. Adam has been a member of the Challenge Group since its inception at the start of the programme, creating a useful link between the decision making at A New Direction and the Arts Council.

The meeting began with handshakes and introductions, and after security passes were issued, we were whisked up in the lift to the second floor. The doors opened on to a spacious reception, all carpets and glass, with a painting on every wall. Everyone was friendly and smiling as we were guided around the offices from department to department.

Adam and his colleagues talked of the frustrations and satisfactions of being in their position. One commented, “I’m a musician so I want to fund as many great music projects as possible. We can help people with grants for the arts applications, all the way up to large arts organisations. But as is well known, the funding is shrinking. Even the lottery money we receive – there are fewer and fewer people buying lottery tickets every year.”

For anyone who cares about the arts, as these employees do, working for an organisation such as ACE can be an unenviable task. Far from being born bureaucrats, swaddled with rubber stamps and correction pens, in reality they’re painters, actors and writers themselves.

“Another problem,” one of the Young Challenge Group commented, “is that nowadays people think that scientists and politicians are there to instruct them, whereas painters, poets, and musicians only serve to give them pleasure. The idea that the arts have something to teach doesn’t occur to a lot of people.”

It was very kind of ACE to give us a guided tour and such a thorough introduction to the work of the Arts Council. On the way out the Young Challenge Group said how empowering and informative they found the day. For one Young Challenger, only one question remained – “I wonder if they’re hiring?” However, for another, the visit raised questions about accessibility when applying for funding.

In her own words, "I am not a writer. It doesn’t come naturally to me. It takes me far too long because behind every word is a second guess. This makes applications to the Arts Council a very daunting prospect for me as I know it is for many others. How can we squeeze our ideas into a box on a page? How can our creative intentions tick boxes in a marking criteria?

"What I wanted to find out from the Arts Council England visit was: can anyone apply for funding without having to fill out a form? What about those that might be unable to write? Could an applicant give a presentation or something instead? Are there other options for people wanting to apply? Very simply, the answer was ‘no'.

"No, they need a written document because money is being exchanged. This makes the application a legal document. What is said in the application (your idea, your vision) needs to be there in black and white because funds are precious.

"This really helped my creative and scatty brain to rationalize the purpose of these forms. They are a written agreement - an offer from both sides.

This made me think back to the applications we read at one of our first Young Challenge Group meetings, and how I struggled to understand them. I was looking for creativity where it wasn’t needed.

"The people we met at The Arts Council are artists too. If your application is for a musical project the person reading your application will have worked in music or still does. They try and go to as many events/gigs/performances as they can within that field. They get disappointed when applications they like aren’t successful. They understand the creative process. But when they read the applications they are looking for something factual, to instil confidence that the money given will be used as intended.

"These were all reassuring things to hear as a young artist wanting to apply for funding. It also made it clearer to me the process that A New Direction has to go through with the projects they fund.

"It would have been great to have longer with the lovely people at The Arts Council. I would have liked to find out more about the projects they fund and how the application process works from beginning to end. I also would have asked them again about how they can make funding more accessible."

As a consequence of her questions at the meeting, the Arts Council are currently considering setting up surgeries to help people with Grants for the Arts applications.