An introduction to the new Art on the Underground commission 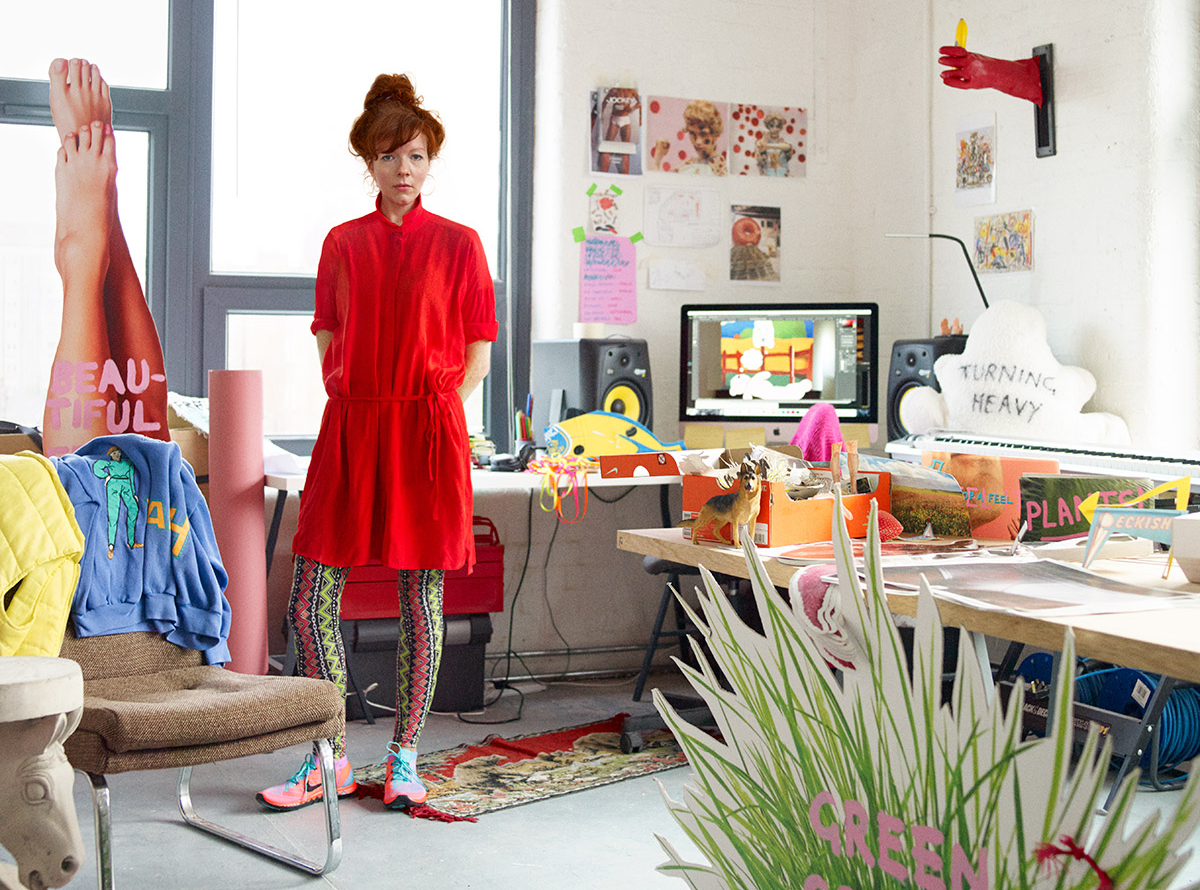 If you’re travelling through Gloucester Road tube station from 7 June you’d be forgiven for thinking you’d stepped into in a surreal video-game, where weaponised custard tarts speed through sci-fi graphics and gargantuan eggs dwarf commuters. However, this explosion of oversized eggs belongs to a new artwork by British artist Heather Phillipson titled my name is lettie eggsyrub. For her major new Art on the Underground commission, Phillipson has filled the 80-metre disused platform at Gloucester Road station with large-scale sculptures, a huge automated whisk, twelve 65 inch video screens and vast suspended images.

Relationships between human and non-human animals are a recurring theme in Phillipson’s work, for this commission she has focused on one of the most fundamental forms in the reproductive system – an egg. my name is lettie eggsyrub conjures many interpretations of the egg; a representation of new life and becoming, of human-animal relations and also of our human consumption of eggs, and our detachment from their origin.

Phillipson’s new commission is a focal point of Art on the Underground’s 2018 programme of exclusively female artists, which forms part of #BehindEveryGreatCity – a major new campaign by the Mayor of London to draw attention to the progress that’s been made by women since they won the right to vote 100 years ago. The 2018 programme will bring a much needed range of female artist’s voices to London - a recent study found that only 13% of the UK’s most celebrated public artworks created since 2000 were by women.

We hope that the programme will question the dominant power structures present in our city. I believe none will do this more than Heather Phillipson’s my name is lettie eggsyrub. Her ambitious and challenging installation poses a number of questions about value, representation of fertility, flows of consumption and crucially the everyday power structures that have become invisible to us.

There are a number of vital themes explored in the Learning Guide that accompanies Heather Phillipson’s commission; one I feel particularly strongly about is ‘Reproduction – Gender Roles and Sexual Politics’. Heather discusses gender inequality, and much more, in the interview below, a longer version of which can be read in the Learning Guide aimed at Key Stages 3 - 5. ﻿ ﻿ ﻿

The Learning Guide will be available to download here from the 21 June 2018.

Tell me about why you became an artist and how you approach your work.

It's hard to say when becoming an artist begins. Like many children, I was really engaged in art across different disciplines. I did a lot of drawing and other forms of visual art, like painting and sculpture. I also learnt music and I was really into writing and reading. My father’s an artist so he exposed me to art from an early age, and my mum is very interested as well, so I was around art a lot as a child. I was encouraged to pursue it. The problem for me was deciding what I wanted to do, because there were many different things, like the music-making and writing, and I could have followed any one of those things. It wasn't until I was much older, after a brief fling with fashion design, that I realised that art is one area where you don't have to choose. You don't have to be faithful to one discourse or one mode of doing things; it's kind of an umbrella under which you can take your practice in any direction. So I found a space where I could do all of those things simultaneously. Video, especially, was a medium in which I could bring all kinds of materials together: I could shove writing and soundtracks into each other, push them apart with images, and make sound occupy space, like sculpture.

Tell me about your commission for Art on the Underground, what it's called and why?

The platform is filled with multiple video screens and sculptures of eggs of various sizes, which are being subjected to various forms of torture. Everything is under threat in some way on the platform. I’m treating the egg as a specific, physical entity, an element of biology, but also metaphorically. The egg is such a clichéd symbol; I wanted to re-confront it, as a microcosm and a macrocosm. Obviously the primary thing about eggs is that they're part of the reproductive system and they suggest new life, or life yet to begin. They’re very resilient in many ways, but they're also incredibly fragile. There's a sort of hope attached to them, but at the same time, because they're very vulnerable, their potential is under threat. And I was thinking about that in relation to the current moment politically, in Europe and the USA, where we're on some kind of edge and nobody knows if or when we might get pushed over it.

How do you think the audience encounters your public artwork (such as this work or your forthcoming Fourth Plinth commission) in comparison to going to a gallery?

The primary thing that I'm interested in is the lack of framework and ‘art' context. Seeing the work on a tube platform, you're not primed to see it, necessarily, as ‘art’; it sits alongside all the other goings-on of public life and is pops into relief because of that, and vice versa. Obviously, when you walk into a gallery you're primed to expect something, and that comes with all kinds of baggage. Sometimes people can feel excluded from art, that it's not for them, or that one has to understand a particular kind of language to be able to engage with it. And a tube station or a public square doesn't have those boundaries. It's just there for whomever to encounter at whatever moment. For me, it's really interesting to take those kinds of conversations outside of the gallery. We're used to the art audience having at least a base level of understanding about art and the kinds of critical conversations that might underpin it, and some people might be familiar with my work, or my ideas, but here, people just come across it. It's an unpremeditated encounter when you're waiting for a train, say, or you're passing from A to X. It has that potential to interfere in the everyday.

As a female artist how do you feel about gender inequality in the arts?

Well, obviously I'd like it to change. It's not just in the arts though is it? It's everywhere. And I think the biggest problem with it is that it's insidious. So it's not just about saying – although this helps – we need to have equal numbers of men and women represented in all areas, it's about an underlying misogyny, a patriarchal system that underpins everything. One has to become alert to it, because it's not just about an apparent gender balance. It's not about numbers. It's about understanding a whole system of thought that inscribes on everything that we do and how we relate to each other across genders and races and ages and how women relate to themselves and other women. And really, before all that, there's intersectionality – all women are not equal in this society either. Women of colour, women who aren’t cis, people who are transgender or non-binary – there are infinite complexities of discrimination, who’s allowed to be what, and on whose terms. And there's a very, very long way to go. This year may be the centenary anniversary of women getting the vote, but what’s that compared to the whole history of recorded time?

Why do you think this commission is relevant to commuting Londoners now?

I’m not sure about the term ‘relevant’ here – I think ‘relevance’ can take root in many ways, and it’s often not immediate. Of course, I've mentioned how the project might respond to a particular political moment, and how food production might speaker to broader flows of consumption and capital etc, but that’s the obvious stuff, and people might not, or needn’t, pick up on that anyway. If I’m lucky, maybe someone will find something that’s beyond my imagination. I’m not interested in prescribing. Maybe more like baffling. Maybe people will find their own relevance, or maybe they'll think it's completely irrelevant. All reactions are valid.