The most important thing we can learn from Malala﻿ 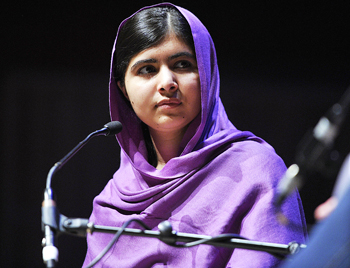 On Saturday morning Malala Yousafzai spoke at the Royal Festival Hall – a late and thrilling addition to the Soutbank Centre’s Women of the World festival (WOW), which was founded four years ago to coincide with International Women’s Day.

The event drew a near-capacity crowd, mainly women given the nature of the wider festival, with a good chunk of the audience aged under 21. It was a really fantastic occasion, with an incredible electric fizz of anticipation crackling in the air as the heaving hall awaited Malala’s arrival on-stage.

If expectations were sky-high, they were well-met, as this remarkable 16 year-old woman (who came to global prominence as an education and social rights campaigner upon starting a BBC blog in 2009, and who survived an assassination attempt by the Pakistani Taliban in 2012) spoke for about 20 minutes, covering a wide range of subjects including women’s rights; universal educational entitlement; the social responsibilities of individuals; and global development. These themes were further extended immediately afterwards, in a lively discussion with Jude Kelly, the Southbank Centre’s Artistic Director.

Whatever one’s own field of interest, there seemed to be really solid insight and encouragement available – personally, I took away very useful food for thought from a powerful assertion that Malala made about how we all have a duty to strive to educate our neighbours' children, as well as our own;

Also, that education in its purest, truest form has no divides – of gender or race, social or financial (very tempting to project my personal admiration for comprehensive schools into this);

That we must fight to preserve the platforms of freedom and equality that we currently enjoy in the UK, including the NHS, rather than take them for granted;

And that charities and agencies with shared goals should by default work together, not compete and duplicate (regular readers will recognise this as a theme close to my heart – in particular, I’m very keen on arts, heritage and other cultural partners joining forces at a local level to better meet the needs of children and young people, schools and families).

Malala obviously has an astonishing range of truly special qualities, including great courage, dedication to social justice, deep thoughtfulness, clarity of expression, and even – as the audience at the RFH learned – understated but warmly engaging comedic timing.

However, something else also struck me quite strongly – about what Malala represents as a public figure, rather than her personal attributes and ideas. I’ve been thinking about this a lot since.

As Malala spoke, it seemed to me that the wisdom and clarity she exhibited, the unerring focus upon equality and justice in any given context, was – whilst beautifully expressed – not so very far away from that which one often gains in conversation with many other young people when discussing similar issues.

Naturally, a big part of the difference comes from the fact that Malala’s life-context and experiences have granted her a platform to express her ideas widely, and to have the wisdom of them thrown starkly into unmissable view by the glaring light of her savage, shocking near-martyrdom.

Many other young people with similar ideas still routinely face being ignored when speaking out, or – even worse – are dismissed as being ‘naive’ - for instance, about the ways in which the complexity of the underlying mechanics of society might obstruct change (for my money, anyone that dismisses a young person’s ideas, without consideration, as ‘naive’ should be automatically dismissed in turn as ‘cynical’ – and I know I’d certainly rather be the former, myself!).

But young people in London, and beyond, are not without the hard experiences that might imbue their own thoughts with a deep understanding which needs to be heard and recognised. A recent LSE study indicated that 50% of those that Kids Company work with have seen a friend or relative shot or stabbed. Less dramatically but more pervasively, children and young people are also amongst the most vulnerable in our society to rising poverty, unemployment and homelessness. And yet decisions are habitually made about the needs of the young without their involvement or consent.

In terms of the role of our sector – in the current context, we feel that it’s more important than ever not just to devise excellent programmes for young people but to actively and meaningfully involve them in decision-making, about both the activities and services which they receive, and across the local community and even the region as a whole.

It’s also crucial to listen deeply to young people about their experiences, challenges and hopes for the future, and to help them to voice these more widely, rather than leaving them ignored, and outside of the general social discourse.

It’s been really fascinating that the main thing that seems to have been picked up in the subsequent coverage of Saturday’s event is Malala’s call for teenagers to engage in activism, including by using social media to connect with others, and highlight important issues, rather than for the narcissistic/solipsistic pursuit of ‘likes’ and ‘shares’. This corresponds exactly to the wider media narrative which further fosters low expectations of our young people, and excludes them from public discussion and debate.

At the core, this is a really great rallying call – who wouldn’t want more young people coming forward to play a role in creating change?

However, to properly enable this opportunity, I think it’s much more important to ask:

– not ‘how can other young people be more like Malala?’

‘how can we treat all young people with the respect accorded to Malala (and what remarkable things could they contribute and achieve if we did)?’

To watch Malala's interview at the WOW Festival, go here

Many thanks for reading this – we’d really like to know your thoughts, so please share them in the comments below, or else on Twitter (@A_New_Direction / @JohnMcArtsEd)

Enjoy the above? You may also like the following A New Direction blogs:

Potential and possibility, not problems and containment

‘No-one has ever asked me…’