‘No-one has ever asked me…’

Young Londoners explore the ethical implications of public protest and political engagement since 1840, and new ways to catalyse dialogue in public spaces, through HLF Young Roots.

The Only Way Is Ethics (TOWIE) is a one-year project funded by the Heritage Lottery’s ‘Young Roots’ grant scheme. The project examines the ethical implications of public protest and political engagement in London since the 1840s. Through workshops, debates and events, TOWIE engages Londoners aged 16–25 in the city’s heritage – and proposes new methods of expressing ideas and catalysing dialogue in public spaces.

The project is run by Emergency Exit Arts (EEA) in partnership with Bishopsgate Institute and the Museum of London. All three project partners have welcomed the opportunity for cross-institutional collaboration.

'Thinking about my TOWIE colleagues at EEA and Museum of London, not only do we possess different skill sets, interests and experiences but we also have different approaches to delivery. Although we appreciated these differences early on, they became really noticeable during the four-day summer school in August 2013. By pooling our knowledge during the planning stage, we were able to devise a rich and varied programme that engaged all types of learners. As a historian, I instinctively prioritise the heritage elements of a project but working with such creative partners has opened my mind to the ‘performative’ potential of our library and archive collections. I loved the photographic studio set up in our library and the opportunity it gave TOWIE’s young adults to interrogate and respond to the past.' 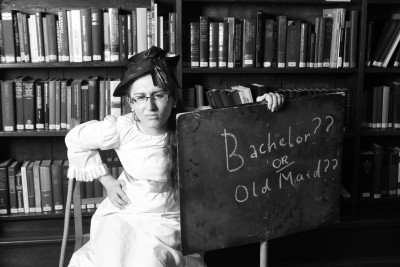 Kirsty Marsh (Inclusion Programme Manager at Museum of London) also believes the collaborative dimension of the project is beneficial:

'This project is the greatest example I’ve seen of heritage and the arts coming together as a combined force to achieve youth empowerment. At the start of the project participants looked at a fabric badge made by suffragettes after their release from prison, from the Museum of London collection. The badge was an enlarged copy of the prison number badge suffragettes were allocated in prison and forced to wear. This object resonated with the young people as they could connect with the suffragettes’ desire to ‘own’ their imprisonment and re-appropriate their treatment by the authorities. Young men and women, who previously had cared little about the suffragettes, were interested in their campaign. This interaction inspired a multitude of creative responses, including a conceptual 3D art installation and a piece of theatre. When questioned about why they had achieved so much on this project one participant said to me, ‘No-one has ever asked me how I feel about these things before.'

The project partners agree that ‘youth empowerment’ is vital to the success of TOWIE. Specific roles for ‘Young Producers’ or ‘Project Builders’ have been created to ensure those involved in the project are able to gain hands-on experience within the cultural heritage sector. Young Londoners shaped the TOWIE heritage themes during 2012 and worked together to devise and host a project launch event in September 2013:

'There is a lack of ethical leadership in politics and business as shown by the MPs’ expenses scandal and failure of the banks that means no one believes in political systems anymore…we need to explore this and then challenge young people’s apathy towards their own political voice!'
Munira Mohamed, Project Builder

We’re talking about things like rebellion, feminism, imperialism and racism – big things, things that need to be talked about. Part of our responsibility is to communicate the essence of TOWIE: the exploration of protest, representation and democracy. Initially I was unsure as to how we, as young producers, could programme performances and debate/discussion that would draw people in (poetry appeals to those with particular interests), but speaking to guests after our launch event – they were still discussing the themes we had chosen to explore and were asking how they could also get involved with TOWIE. That’s why we started to spill our debates onto twitter with #TOWIEthics
Gabriel Akamo, Young Producer

We have to find ways that make people feel comfortable to say what they believe in, regardless of whether they represent the ‘norm’ or challenge people’s initial impression of you. At our last project event – inspired by the use of rosettes in political campaigns in the past – we created TOWIE rosettes to encourage people to ‘own their views’. All of our guests had to write something that they believed in on a plain white rosette as they entered the space. Then they wore that rosette all evening. This got the guests to open up and talk to others as well as making them think… If we can find lots of different ways of supporting people to ‘own their views’ then I think we will have done a great job with TOWIE. @Ownyourviews
Rumela Begum, Young Producer

TOWIE Young Curators have also collaborated on a temporary project exhibition, on display in the corridor at Bishopsgate Institute until 6 December 2013. Young Producers are now preparing to host a dinner and debate as part of Parliament Week 2013.

The final word on the project comes from Chloe Osborne (Associate Director at EEA):

'The collaborative process of delivering a programme like TOWIE, the exchange and negotiation between heritage professionals, creative specialists, ‘Young Producers’ and ‘Project Builders’ is always surprising. The biggest challenge is to leave the space of uncertainty unfilled. We wish to support our young producers on their own journeys to decision making, regardless of tight deadlines and pressures from our marketing colleagues for clear messages they can transmit to TOWIE followers. It’s also a challenge to tell the story of the project from multiple points of view – but I think we’re getting there!' 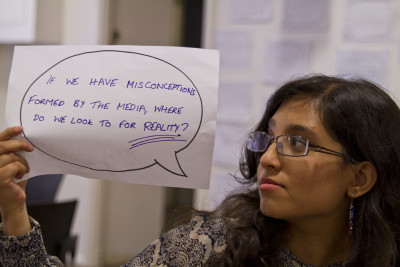 It is a rolling, open programme of grants for £10,000 - £50,000; projects must have a heritage focus, be shaped by youth need and youth voice, and delivered in partnership between a heritage and a youth organisation.

For further information on this and other HLF programmes click here, or attend an information event for applicants (upcoming sessions are Thursday 7 November and Thursday 5 December, 10.30-1pm).