The art of letting go

Artist Lucy Claire pushed herself and her partner teachers out of their comfort zones for their My Creative School project, and the results were resoundingly positive 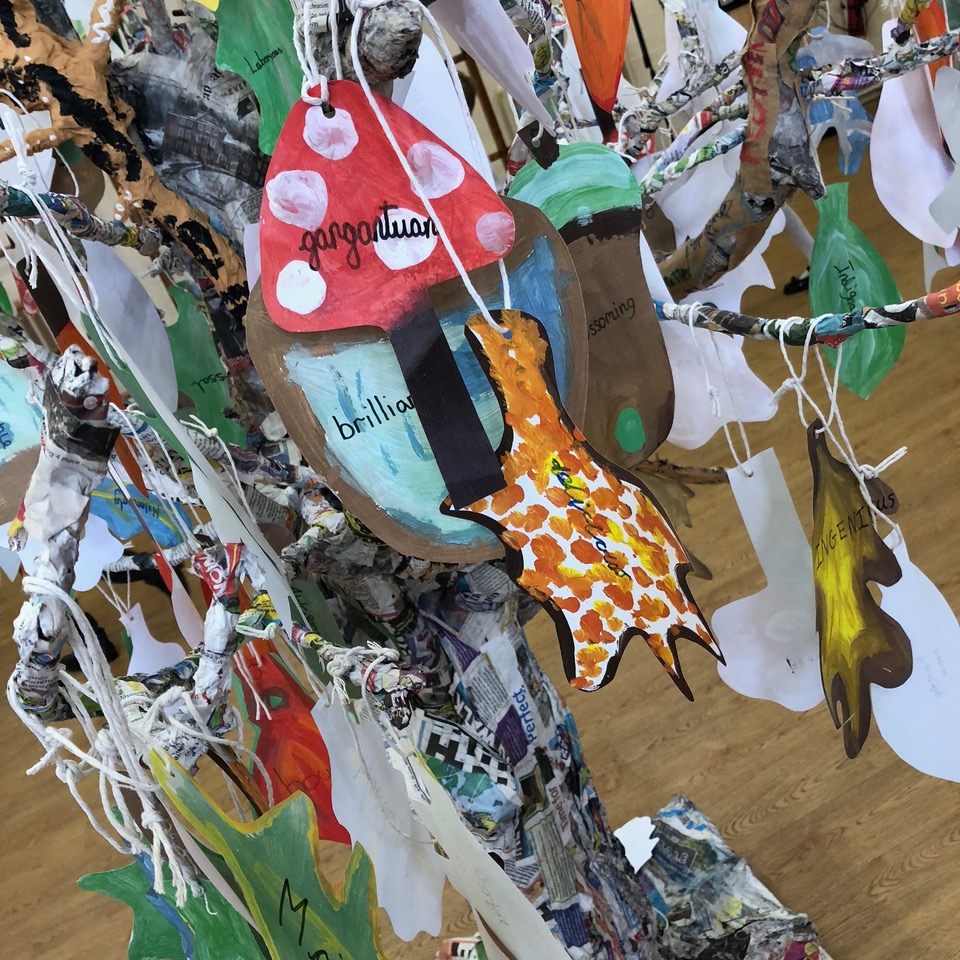 The first thing I learnt about Daniel Stringer, the Year 5 teacher I had been partnered with for the My Creative School programme, was that he thought ‘art was just glitter’. The second thing I learnt was he would start a maths lesson with a yoga session because he’d read somewhere that it helped focus the students' minds. He was a creative thinker, he just didn’t know it.

November 14th 2017 marked the start of an exciting journey together where we would explore sound, sculpture and pupil-lead learning as a way to encourage creative problem solving and increase vocabulary in the students as well as engaging the wider school community. It was a journey that took us both out of our comfort zones.

The next time I met Dan he’d brought along Erika Mint, a fellow teacher he had persuaded to take the My Creative School journey along with us. She was a welcome addition to the team which allowed us to ultimately have a bigger impact in the school.

We set off and at a heck of a speed! I was astonished at how quickly they planned, implemented and moved on to something new. After the first planning session, we came away with enough ideas to fill the entire school year. They were both big planners and wanted to know exactly what was going to be achieved and how. They needed complete control and it left me wondering where the time for play, experimentation and getting things wrong was in the classroom.

As a composer and sound artist, I spend a great amount of time developing and creating a piece of work. I realised that my process is the most enjoyable part for me and therefore the most important. I went back to them with a challenge; to slow down and let the outcome of the first session determine the direction of the next. We stripped the plan right back and approached the children with our one big idea. They would determine the direction of the project, they would learn how to creatively problem solve and work together as a team to create something collectively and their teachers would learn the art of letting go.

Our big idea was to create a vocabulary sculpture which would grow vocabulary through engagement with the wider school community. The pupils were given complete freedom to design a sculpture based on the brief ‘what grows and expands?’ and at first there was a slight feeling of chaotic excitement and uncertainty.

The hall was filled with questions.

"But what are we supposed to be doing?"

I was in the same situation as Dan, Erika and the pupils - I had never made a sculpture before. I had collaborated with sculpture and installation artists as a composer, but my work is usually very much music and sound focused. I was out of my comfort zone but I was unafraid to try and trust in the creative process was something I could demonstrate to them as being a good thing.

We took the children on a walk and discussed what grows and expands. The change in scenery sparked something and we explained that all ideas are right, nothing is wrong and now was a time to experiment. Ideas soon started to take shape. We could have had a vocabulary jellyfish, a vocabulary volcano, a vocabulary universe, a vocabulary toenail, a vocabulary brain and many more. After a silent vote, the general consensus was to create a vocabulary tree.

We also gave the pupils the freedom to choose how they worked, with a group, independently or in pairs. The majority enjoyed having the freedom to choose who they worked with, but there were a few who didn’t cooperate with others well. We encouraged them to problem solve and negotiate the situation rather than enforce them to work in another group.

During the first session, I noticed the children tended to not listen to one another and the teachers had a fear of losing control. However, over the weeks Dan and Erika’s trust in the pupils' behaviour grew and the pupils acted with greater responsibility. The children began to listen more and worked together collectively. Gradually they began to get used to the new freedom they had in a class and began to feel more comfortable in the process of imagining and creating their own work instead of copying an example. They began to let go, trust each other and the creative process.

Over the weeks the vocabulary tree grew and grew. Alongside the practical work of making the tree sculpture, we had other activities going on that were linked to the tree and to the curriculum. It was a multipronged approach to get creativity into the curriculum and engage with the wider school community and each new activity inspired a branch on the tree. The first few weeks were jampacked with activities, we were trying to do too much in a day and it was too exhausting to keep up.

Can I suggest that thats the only thing we focus on next week? Slow things right down…
Dan

I agree that slowing the activities down will mean that all the children will be able to engage and fully explore in the creative process without rushing. Slowing down is maybe not the best way to describe what we planned next week - more that we would only be introducing one new activity so that the sculpture can be given more time and developed creatively in conjunction with our class topics.
Erika

They are starting to see the benefits of the creative process, of trying things, and trying out another way and reflecting, thinking and growing from that process… They are starting to be more open to giving the pupils a chance to experiment and play rather than focusing on the end result and moving quickly to the next thing.
Lucy

I began to introduce sound-based activities inspired by the growing vocabulary. We had been given a few onomatopoeia words and the walks outside encouraged me to explore soundscapes as a creative activity to inspire creative writing and develop pupils listening skills. First, we listened to some forest soundscapes for inspiration and then began to compose our own. We accompanied this activity with making windchimes for a partner tree in the school playground and writing poetry to be performed alongside the soundscape. The whole day was one big experiment in which everyone trusted the process and which had brilliant results.

Sound has been more creative than I expected.
Dan

There’s no reason why it can’t take all afternoon. One of the main things I’ve learnt from doing this project has been giving time to activites and allowing the pupils to finish their work. It’ll give them more pride in their work and it means the quality is higher.
Dan

I was told that parents usually only come into the school for planned formal assemblies and parent’s evenings - for a forced and staged representation of what happens in school. At first, there was some resistance from the parents to get involved in our project, but I also began to wonder if there was a bit of reluctance from the teachers to open the door too. Was it one more pressure for them to deal with?

We started slowly, balancing everyone's reservations, by first tempting them in to donate words with balloons along the approach to the school, then with a chant and rally at the school gate, then inside the playground to help hang the windchimes, then finally inviting them into the school hall for a fully pupil lead ‘Free Range Assembly’.

By the end of the project we had seen a real improvement in the pupils' behaviour, engagement and ability to problem solve. Creating the ‘Free Range Assembly’ they each took on the responsibility to make it the best it could be, they were assertive in their choices and they collaborated with each other to make it happen. They are much more capable of independent work. They taught themselves through experiences. They taught each other through their experiences. They taught their parents through the experience. All Dan and Erika had to do was let go of responsibility and allow the pupils to organise and lead the event. They relaxed and trusted the pupils to present their work in the best way possible; their own way.

These ideas have informed a tool and case study for the MCS Learning Resource - read about it here.