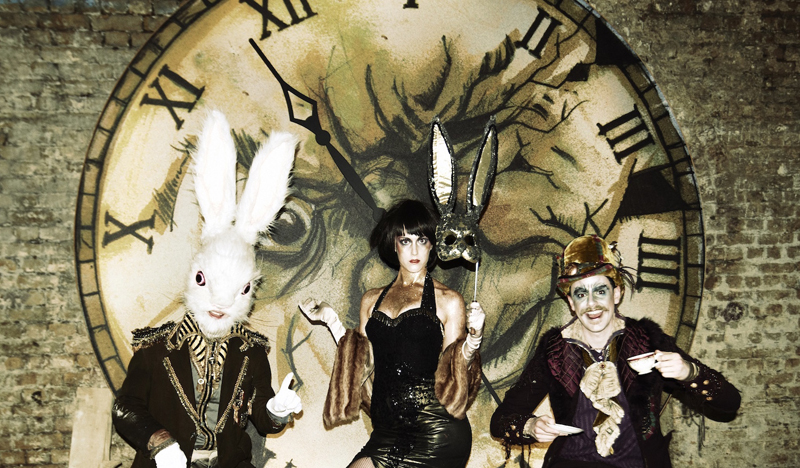 Kimberley Matthews from New Regent's College, a vocational college and Pupil Referral Unit in Hackney, was the lucky winner of our 'recommend a friend' prize draw from our 2016 Schools Conference.

For her prize, we arranged tickets for her and her students to see Alice's Adventures Underground. Read a summary, written by two New Regent's College students, below.

On Thursday 20th April we attended Alice’s Adventures Underground at The Vaults courtesy of A New Direction. We had a fantastic time from the very moment we arrived at the venue, it was unlike any theatre we had been to before! There were no flashing lights and big signs but a simple black gate and the sound of the trains going over our heads. As soon as we stepped into the venue the show seemed to begin, even the bar seemed like a stage set, with people in costume on high wires and walking around interacting with us.

Once we went inside we were even more amazed, from the very first room - full of thousands of props, optical illusions, projections and effects - we were fully absorbed into Wonderland! For some of us, it was strange to have the characters talk to us and expect us to interact with them and eat the food, drink the drinks and make decisions. However, we quickly got into this and enjoyed it a great deal. We found it really funny when the rabbit picked out our teacher because she had a bright top on and he said she would fit in because she looked like a Wonderland rebel!

Just when we had got used to the style of theatre and were enjoying the interactions, projections, puppets and much more there was another surprise… we were sorted into houses and were separated. This meant that we all saw different parts of the show and all had different experiences. Some of us were clubs and spades - we were part of the resistance and wanted to take down the Queen of hearts - but some of us were diamonds and wanted to catch the black cards and support the Queen. We came together again in the final courtroom scene and the big reveal was really interesting. We all had slightly different parts to play in the last scene and we learnt a bit about the experiences we had all had separately.

Once the show had finished it was really interesting to spend the journey home and the following day talking about what we had all experienced and how different and similar our experiences have been. None of us had been to a show like this before and we think that it was much more fun that seeing plays at a theatre where we just sit and watch! We would like to thank A New Direction for giving us this opportunity and we hope to see something like this again in the future.

Here are some quotes from different people who went to see the show:

I thought the whole thing was very cleverly done, especially how all of our stories worked together at the end
Pupil 1

I loved the optical illusions, the set and the projections. It was so immersive! It was one of the most polished forms of promenade Theatre I have seen, I generally forgot I was at the Theatre at points and thought I was in Wonderland
Ms Matthews

The puppets were fab, the massive bird (Jabberwocky) at the end was the most impressive but also the smoking caterpillar was funny and the weird cat that’s mask split in two was also great.
Pupil 2

It was weird at first having actors talking to me, I did not know what to say and I felt uncomfortable however I got used to it and liked that I got to choose what to do and almost be an actor myself
Pupil 3

I bet it cost loads and loads to make, it was mind blowing, I felt like I was in another universe!
Pupil 4

This year, our annual Schools Conference will be taking place on the 10 October 2017 at the British Library.

We’d love to see you there, so save the date in your diary and keep an eye out for more information soon!