I guess you could argue that the partnership began in early 1999. I stumbled across an advert for a teaching position in a brand new school. I applied, was interviewed and got offered a job by the original Headteacher of Gallions Primary School, Bernadette Thompson. Along with around 8 or 9 other over-enthusiastic teachers, I was one of the founding members of staff at a school which had an incredible vision and was all about innovation, creativity, creative arts, creative thinking.

Bernadette taught us to think differently, to challenge what was ‘normal’ for schools.

My first real personal connection with Creative Partnerships came after I re-joined Gallions; having left to take up a deputy post for two years; from January 2007, I job-shared the headship for 2 years. One of the tasks during this spell was an application to become a school of creativity. We were unsuccessful, but I remember a follow-up meeting with Steve Moffitt and Rebecca Branch from A New Direction, sitting in the Garden of Life and reflecting on why we were not successful. We left the meeting with a promise that ‘we must talk again’; ‘there must be something we can do together’.

Time passed, I took over as full-time head in 2009. I kept sending invitations to Steve and Rebecca to various events and kept asking them to keep us in mind for any opportunities that might come up.

Then, out of the blue, the offer to apply to become an International Change school came about. We did this, we took six children to Oklahoma with AND for the World Creativity Forum and the Gallions / AND relationship was struck up again. On the back of this, and on many conversations and ‘chance’ meetings at various creative education events, AND invited me to speak at an event to discuss the concept of the London Curriculum.

On the same programme was Tony Little, Headmaster of Eton College.

Is it terrible to say that for the life of me, I can’t remember what Tony said in his presentation? But we had a brief conversation during the coffee break. Nothing more than an introduction and a swapping of business cards, and Tony saying, you should come for a visit. I didn’t think much more of it and assumed that Tony was just being polite.

I took a chance and followed the conversation up with an e-mail. My initial visit to Eton was arranged. And following this visit, Tony came to visit Gallions. What I will always remember are Tony’s words as he left Gallions following his walk of the school and time with us, "Inspiring, Paul, very inspiring." 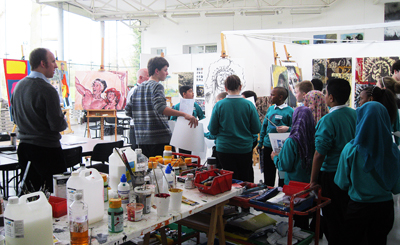 I still didn't think it would really go anywhere. Why would a prestigious organisation like Eton want to engage with a Primary School that sits at the last stop on the DLR on an estate that is recognised as one of the 5% most deprived areas in the country?

When Stuart and I first spoke, there were a million ideas in my head, and I think in Stuart’s too. Because there was nothing to lose – this relationship surely wasn’t going to last anyway – we went for it, with all our ideas:

Eton helping to fund some of Gallions creative arts provision?

In summer 2013, four Eton boys spent a week each at Gallions, working with children, participating in events, acting as fantastic role models. The four boys then returned to Eton and have built a year-long fundraising campaign for Gallions’ Music Provision and new Music Centre. These four boys will very soon be helping to select the next set of boys to come on work experience at Gallions in summer 2014 and so it continues.

In November, the four boys made a presentation to Eton Parents during the annual St. Andrew’s Day Open day. After the presentation, I had the privilege to speak to many parents. I was overwhelmed at how much the parents valued the relationship. How desperate they were for their sons to be chosen to spend time at Gallions – how they saw the relationship with us as a life-changing opportunity for their children.

In November 2013, the four boys and Stuart attended a Philosophy for Children training course led by Gallions.

In March 2014, 31 Year 6 pupils from Gallions spent the day at Eton, a chance to experience outstanding facilities – a story teller in the chapel, a session in the Music Tech lab, a group activity in the Art Studio.

Penn House are organising a fundraising concert in January 2015 in aid of the Gallions Music Programme. Penn House will be sponsoring a creative writing annual award for Year 6 children at Gallions.

Many schools would have given up on the A New Direction relationship, might not have been brave enough to even have the cup of coffee with the Eton headmaster, but what time at Gallions, Bernadette and Oklahoma have taught me is that we have to be brave, to be innovative, to think differently.

One of the Gallions children, during the Oklahoma visit said to me, “We don’t think outside of the box…At Gallions there is no box.”

The Gallions – Eton/Penn House partnership shows that anything is possible. Rip up the rule book – live your dreams…