Building on the success of BBC Music's Ten Pieces for Primary, which has already engaged more than half of UK primary schools, the BBC is extending the ground-breaking initiative to secondary schools. ﻿ 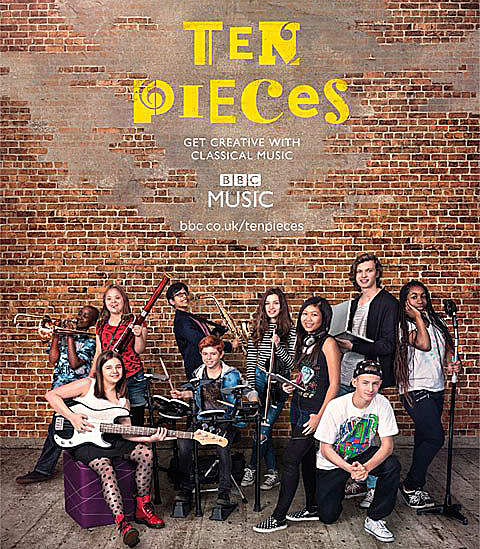 The BBC is extending the ground-breaking initiative to secondary schools. The aim is to open up the world of classical music to children aged 11 and above, inspiring them to respond creatively to the repertoire.

The Model has brought together partners from across sectors to develop a robust commissioning process that increases quality, reduces costs, and supports the development of meaningful partnerships between schools and Camden’s dynamic creative sector. The CCM was developed by the Roundhouse and Camden Council through a pilot project during the Roundhouse’s tenure as north London’s Associate Bridge organisation. Read more

“It’s bizarre that it is not a requirement for the very places where children will learn how to read, draw, think and create to have a space for books,” the new children’s laureate Chris Riddell said. “I want to help and encourage every school to do more for readers. If they have nowhere to read, create a space with a few books; if they have a bookshelf, have two; if they have a reading room, aim for a library”. Read more

The primary school population in England has continued to rise sharply, with 94,000 extra pupils this year, reaching the highest levels since the 1970s. The 2.1% increase in primary numbers is equivalent to six more pupils for every school. Read more

A new national initiative to boost the development of choreographic practice will give groups of secondary school and college students from across the UK the chance to create and perform short works inspired by some of Britain’s leading choreographers. Around 500 students from 36 schools and colleges will be involved in the ‘Rambert Elements’ pilot programme. Read more

A space adventure for children 7-11 that follows the real life story of astronaut Tim Peake as he becomes the first British astronaut to visit the International Space Station later this year. The adventure will consist of six missions, each with a new science-based challenge for the students to complete. All participants who successfully complete each challenge in the adventure are rewarded with an online digital badge endorsed by one of our partners. Read more

Prime Minister David Cameron has been told to improve youth services and ensure any new laws passed by government adhere to the United Nations Convention on the Rights of the Child (UNCRC), by a group of youth sector organisations. Read more

Creative students – hold on to your innate youthful thinking

As this summer’s wave of creative students prepare to graduate, group creative director at AKQA gives his tips on how they can create enduring ideas. Read more

National apprenticeship qualifications could attract a new generation of trainees

Apprenticeships are the big hope for rescuing Britain's skills base. During the election campaign, David Cameron promised three million extra places. This pledge is a massive increase on the total of 440,000 people, from all age groups, starting an apprenticeship in 2013-14. Read more

The Summer Conference will explore exciting practice taking place in schools within Whole Education Network around areas such as flipped and self-regulated learning, transforming professional learning, and driving digital fluency, as well as sessions on funded projects your school can get involved with. Book your place

The Audience Academy: Your first step into a career in film

The Academy is looking for 30 of the most talented 16-19 year olds from across the UK, who love watching and talking about films. Join them in Sheffield for an unforgettable week-long experience where you will learn from leading industry professionals about how, why and what films make it to the big screen. Read more