All eyes on us - The Power of Participation

Having the opportunity to make the film meant that Eelyn Lee Productions and a crew of young filmmakers from East London had meaningful roles to play during the summer of 2012. 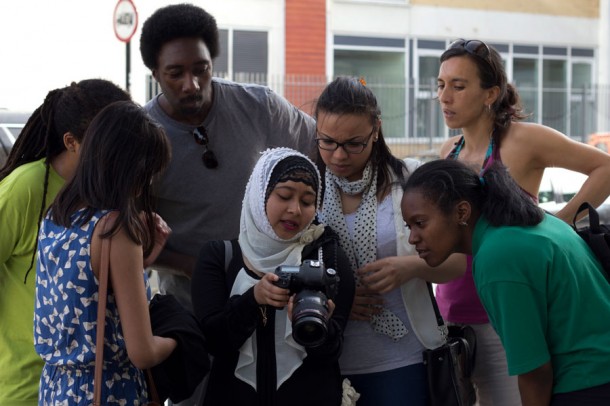 After months of seeking permission from LOCOG to make the film, once we got the green light, we were suddenly active participants in the London Olympic and Paralympic Games.

I had spent the previous three years mentoring, training and collaborating with the young filmmakers on a number of projects but this was the commission that would raise the stakes in that we only had one chance of capturing this 'once in a lifetime' story.

With only one month to go before the opening ceremony and access to only three rehearsal days we had to find our characters & build a story quickly. When we arrived the professional cast had already spent a full three months working together. Their banter and finely tuned bodies were proof of that.

Much of my film work involves active participation and I like to work collaboratively, but nothing beats the experience of 'putting on a show' together. That sense of working intensely and creatively towards a shared goal was palpable in the rehearsals.

Stephen, our main character in the film had found this experience to be life changing. For him, participating with an entire cast of deaf and disabled performers meant seeing himself in a new context, discovering new confidence and forming a new self body image.

Since the early community arts projects of the 70's to the reality TV shows of the 90's we have known that transformation can be achieved through creative participation.

During the summer of 2012, it was perhaps the Games Makers who were the public symbols of this. They had a sense of purpose, inclusion and best of all, made the role their own.

The Games Makers; the hundreds of volunteer performers; the professional cast members together with the massive audiences, perhaps makes the London Olympic and Paralympic Games one of the biggest participatory projects ever.

For us, the filmmakers of East London, the fact that this giant event landed on our doorsteps meant that it was particularly significant to have a role to play in it.

For the young people working on the film, some of whom themselves are deaf and disabled, the experience has informed and validated their identities as filmmakers in their own local area.

The film itself captures the spirit of the Olympic and Paralympic summer through the personal stories that unfolded within it. It tells the story of the making of an opening ceremony that needs to be heard to gain an insight in to the benefits of participating through the arts on a local, national and international scale.

All eyes on us will be screening on Sunday 30 June at the Rio Cinema in Dalston as part of the East End Film Festival. For more information click here

Eelyn Lee, Director of All Eyes on Us (Guest Blogger)