Spoke is a new visionary poetry and spoken word programme that will offer people in East London an opportunity to watch, perform and develop careers in spoken word. 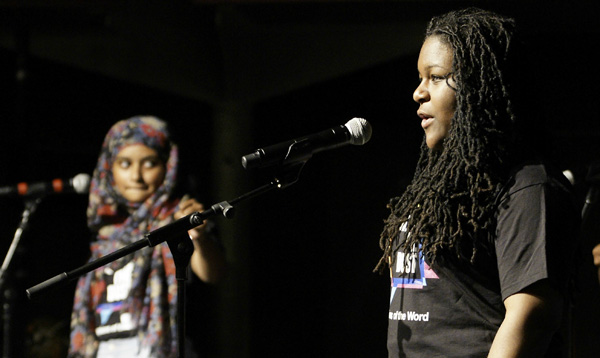 (Image credit: 'Shake the Dust' photographs by Polly Harvey for Apples and Snakes)

The programme will also allow people to performance poetry in and around the newly evolved Queen Elizabeth Olympic Park, the former site of the Olympic Park.

Commissioned by the London Legacy Development Corporation, the programme is being developed by A New Direction together with Apples and Snakes, and Spread the Word.

This innovative programme consists of three strands of activity:

2. East Slam – a dynamic and surprising programme of free spoken word poetry performances for a range of audiences throughout public space in East London. Watch out for poets in shopping centres, parks, local libraries, childrens centres as well as arts venues.

3. Poetry Pathways – an in depth education programme taking place in six schools (in the first year) throughout Barking and Dagenham, Greenwich, Hackney, Tower Hamlets, Newham and Waltham Forest. Experienced spoken word artists will partner with each school, developing mentoring and training opportunities for young people and their teachers. Also workshops for local poets and training for professional writers.

This project is one of the first to launch the Legacy Corporation's ambitions for arts and culture in the Park and surrounding areas.

As part of the Corporation's long term Arts & Culture strategy, we are commissioning and developing a number of projects which show how arts and culture can enliven our public spaces and connect and work with local communities. It is our vision for east London to be a thriving cultural district, and the Queen Elizabeth Olympic park to be a key part of that story.

A New Direction
We connect children, young people and education with the best of arts and culture in London. We believe that together we can make London the best city in the world for young people's cultural and creative development.

Spread The Word
Spread the Word is London's writer development agency. We curate a programme of affordable workshops, masterclasses, and engagement projects. Through this range of activities, we nurture long-term relationships with writers to bring talented new voices into the literature economy. Spread the Word supports London-based writers of all forms and is funded through Arts Council England as a National Portfolio Organisation.

London Legacy Development Corporation
The Legacy Corporation is the not for profit organisation responsible for the management of Queen Elizabeth Olympic Park and the regeneration of the surrounding areas. It is committed to creating world class arts and culture for all to enjoy.