10 Tips for Teachers: How to plan a student-led Arts Week 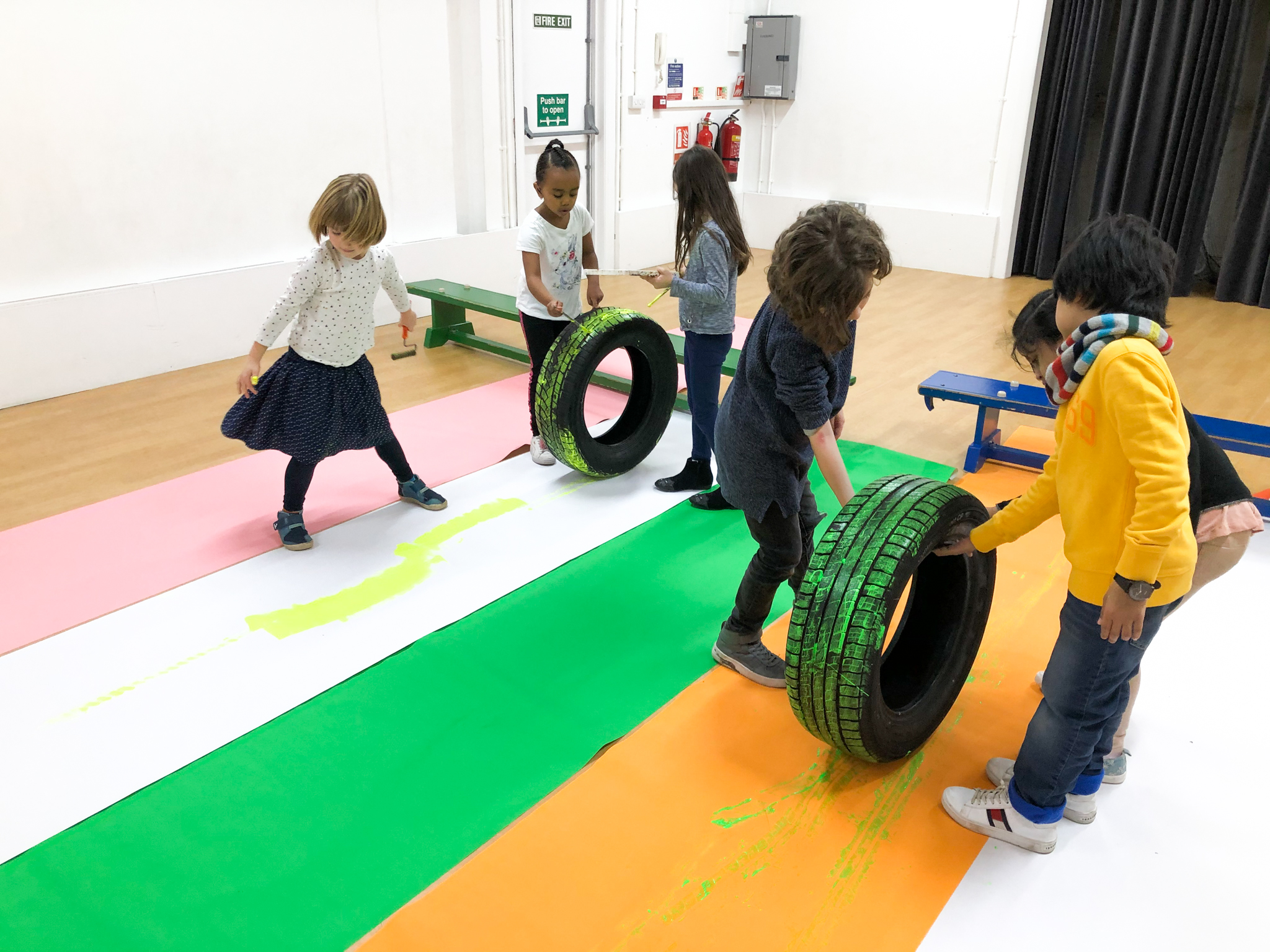 Soho Parish is a one form entry C of E Primary School situated in the heart of London. Living up to the school’s motto ‘Small School, Big Heart’, we hold pupil wellbeing at the centre of everything we do. We have always had a child-centred approach as a school and highly value the arts; believing that creativity can be applied across the curriculum in all our teaching and learning. We seek to harness children’s imagination and curiosity by providing a creative, stimulating and challenging education for all our pupils, equipping them to enjoy life in all its fullness.

As part of this vision we embarked on our Artsmark journey two years ago, firstly as a way to celebrate our achievements, but also to help us grow and develop our arts provision. This journey has been such a positive and rich experience for all those taking part and has especially helped us to strengthen our partnerships and pupil engagement.

Through the Artsmark process, we developed a two-year partnership with The London Transport Museum who were so supportive from start to finish. We worked collaboratively on two projects with the intention to develop and strengthen pupil voice - and that we did! This year's collaborative project was based around developing a student arts council who would help to plan our annual Art Week, using the London Transport Museum as their inspiration.

Although this project was designed in close collaboration with a cultural partnership, you could easily do something similar in your own school using local cultural and arts organisations as your inspiration and starting point, and by following our 10-step guide!

When I was just a student I wasn’t enjoying it as much as I am now, as I wasn’t as interested. Now I’m an Arts Councillor I have passion for it and I want to encourage people to do the same

These were the impactful words of one of our KS2 Arts Councillors when interviewed about the project they had undertaken this year.

To elect the council, we held an arts-themed assembly, discussing their value and importance, introducing our idea to create a student Arts Council, and explaining the roles, responsibilities and desirable qualities for someone applying.

Children in Key Stage 2 were then given application forms with questions such as: ‘What skills do you have that would make you a good ambassador?’ and, ‘What ideas do you have of how could we could celebrate and promote the Arts within our school community?’ The applications were fairly judged without looking at the applicants name - and our Arts Council was formed!

2. Plan the project and decide on a theme and cultural venue

The theme of our Art Week this year was ‘journeys’. How did we decide this? For the autumn the term the whole school’s learning was underpinned by the concept of ‘identity’, so we thought about our identity as a school, our school’s location and our own identities as Londoners. This led to thinking about the journeys we take around London, our journeys inside and outside the city, but this can also be the different journeys we take in life as we grow and develop. This worked perfectly to develop a project with the London Transport Museum!

3. Visit the cultural venue with your Arts Council to gather ideas

Once we had appointed our eight Key Stage 2 Arts Councillors, they visited the museum and had a private tour. As they explored the museum, they took photos of objects and displays that inspired them – signs, maps, moquette fabrics, costumes, models, posters, postcards, tunnels and bridges. 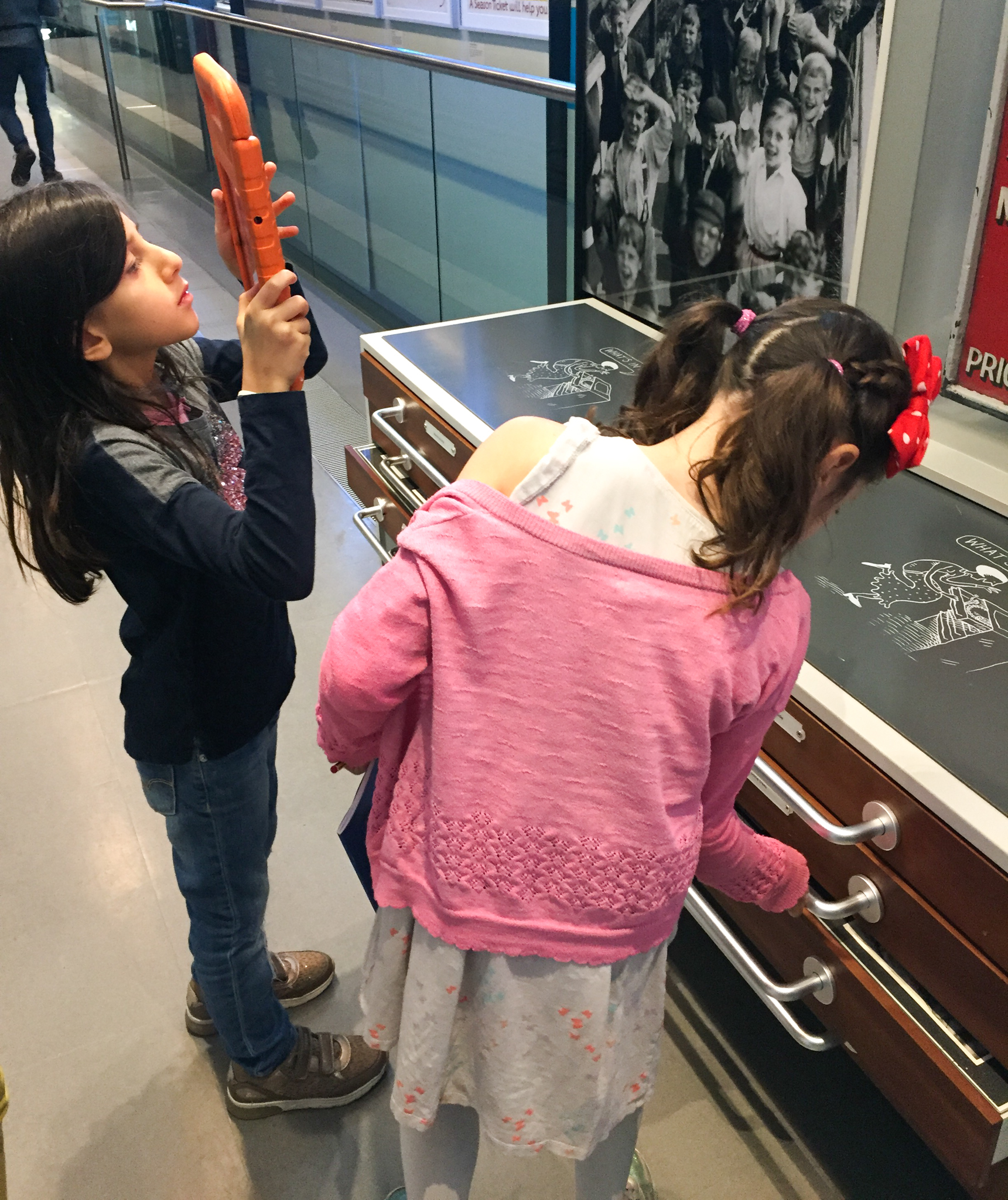 4. Use the inspiration to mind map ideas for art projects back at school

Back at school they mind mapped ideas of art projects that could be developed using these objects as starting points. 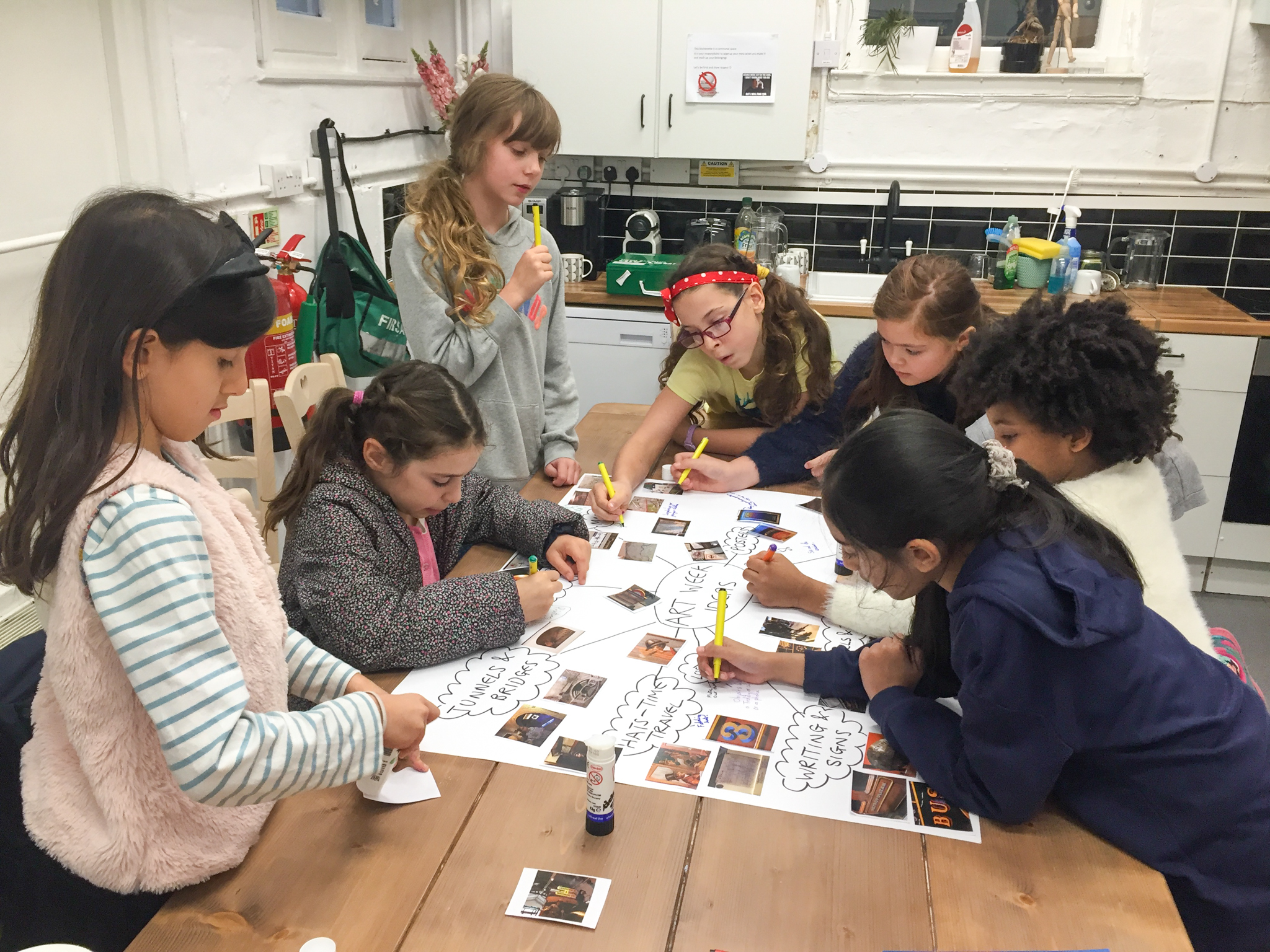 5. Get your arts council to lead a staff meeting introducing project ideas

Next came the exciting part, and a first for all of the children. The student councillors stayed after school and communicated their ideas to the teachers at a staff meeting, during which, they paired up with a teacher to help plan their workshop. 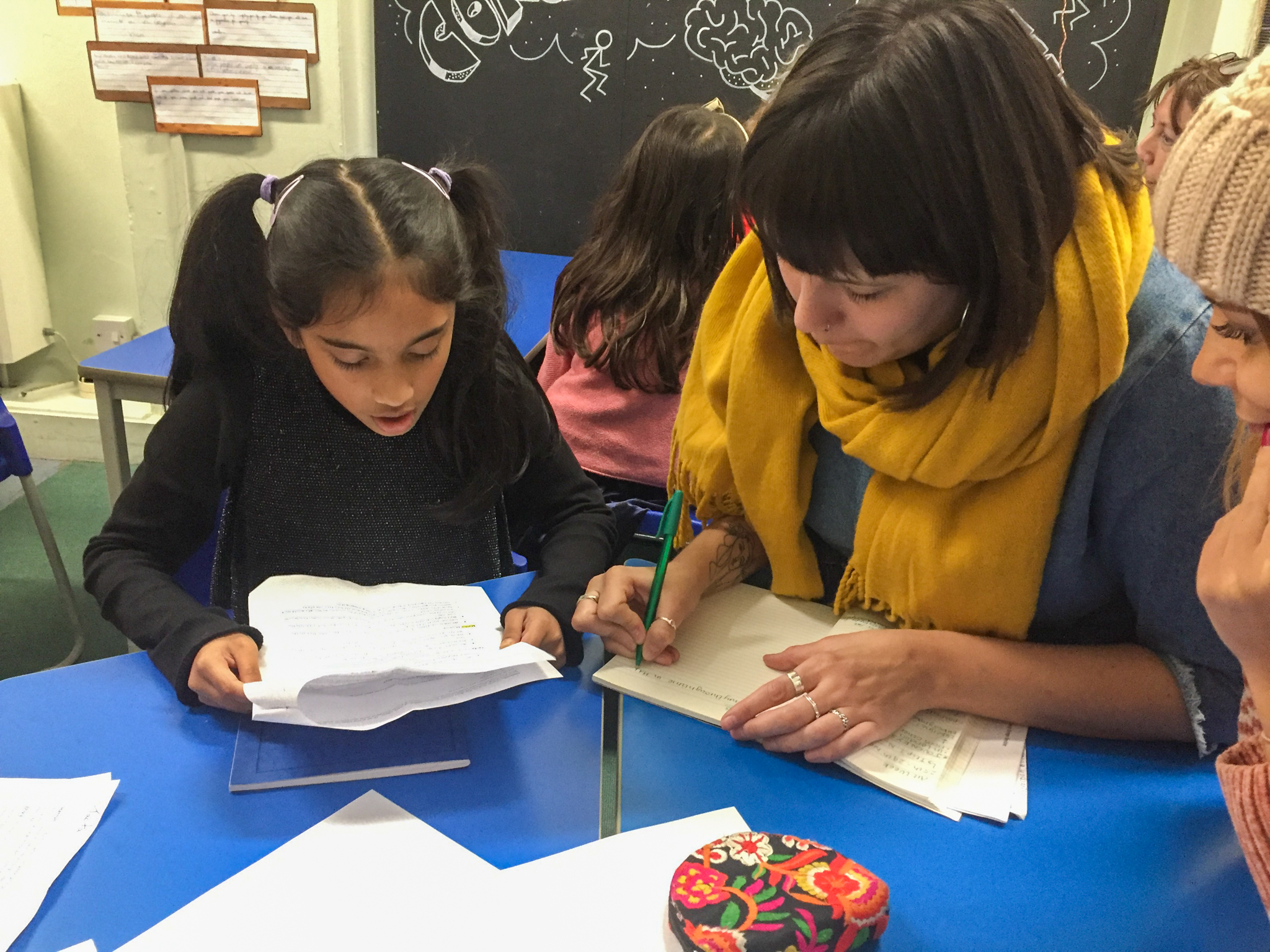 Our Arts Council led a whole school assembly to tell the children what they had been doing and introduce them to the different projects that were on offer.

7. Allow children to choose their workshops for Art Week

We use the same model every year now for Art Week, where we offer about 10 workshops led by teachers and TAs over the week. Children get to choose which three to four they would like to take part in and we mix the groups, from EYFS to Year 6, so children get to work with other adults and children across the school.

This year, every child took part in a different ‘journeys’ themed art workshop each day, influenced by the objects and displays at London Transport Museum. They had the chance to develop and extend skills, and express their individual interests, thoughts and ideas. Some pieces were created individually and others collaboratively with other pupils of different ages in the school.

These included ‘Wheely Fun Mark Making’, using different vehicles and tyres rolled in paint (pictured above); ‘Marvellous Moquettes’, designing their own moquette fabrics; ‘Typography’, designing their own fonts; and entering a lost property office to practice their observational drawing of lost and found objects which they then transformed into Cubist inspired paintings (pictured below). 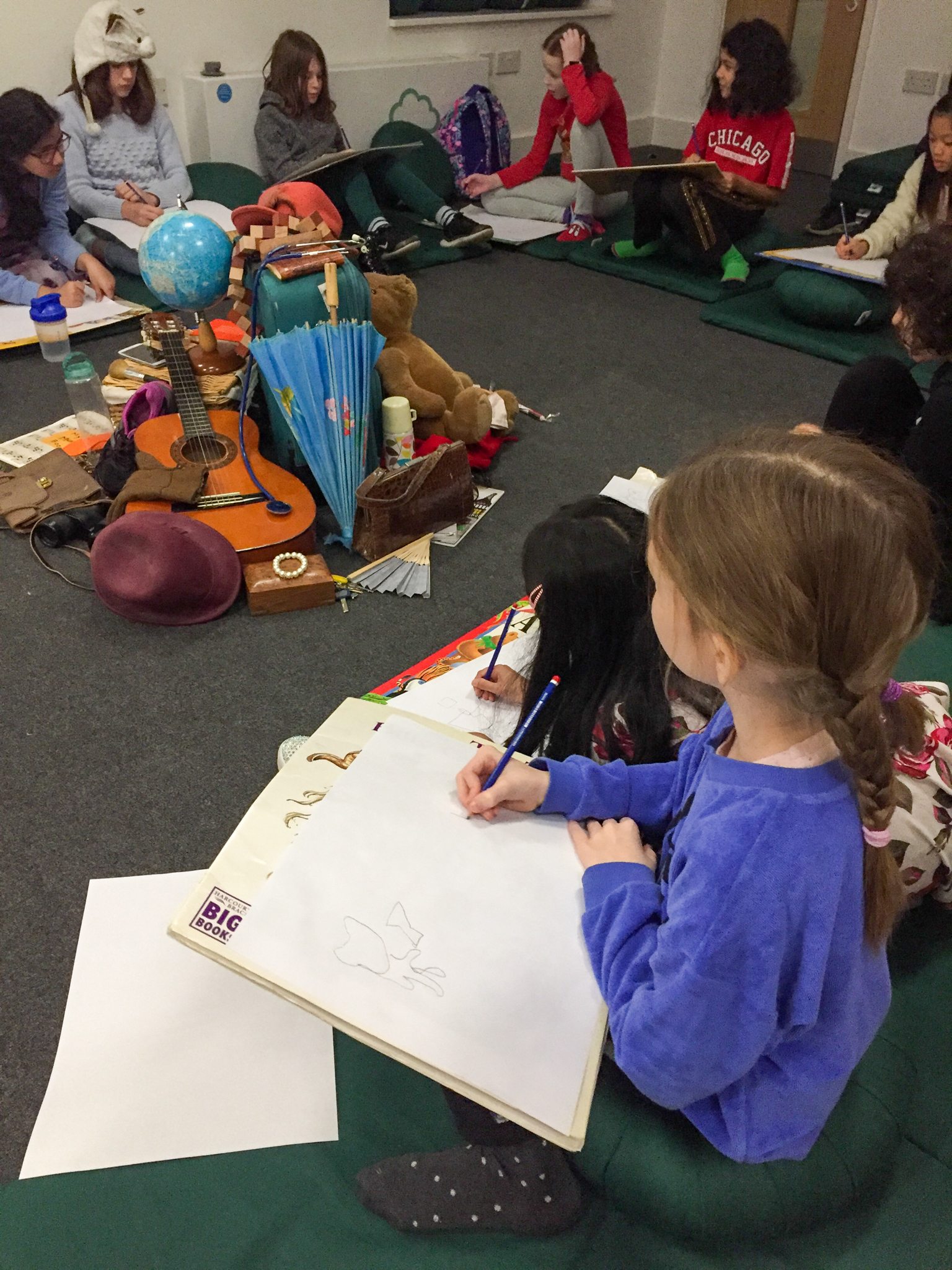 9. Have your Arts Council to help curate an exhibition of the work for the whole school community

Come the end of the week, we put on a large exhibition in the school hall of all the children’s amazing work. The Arts Councillors helped to set it up, showed parents and governors around, and helped children to interact with some of the displays. 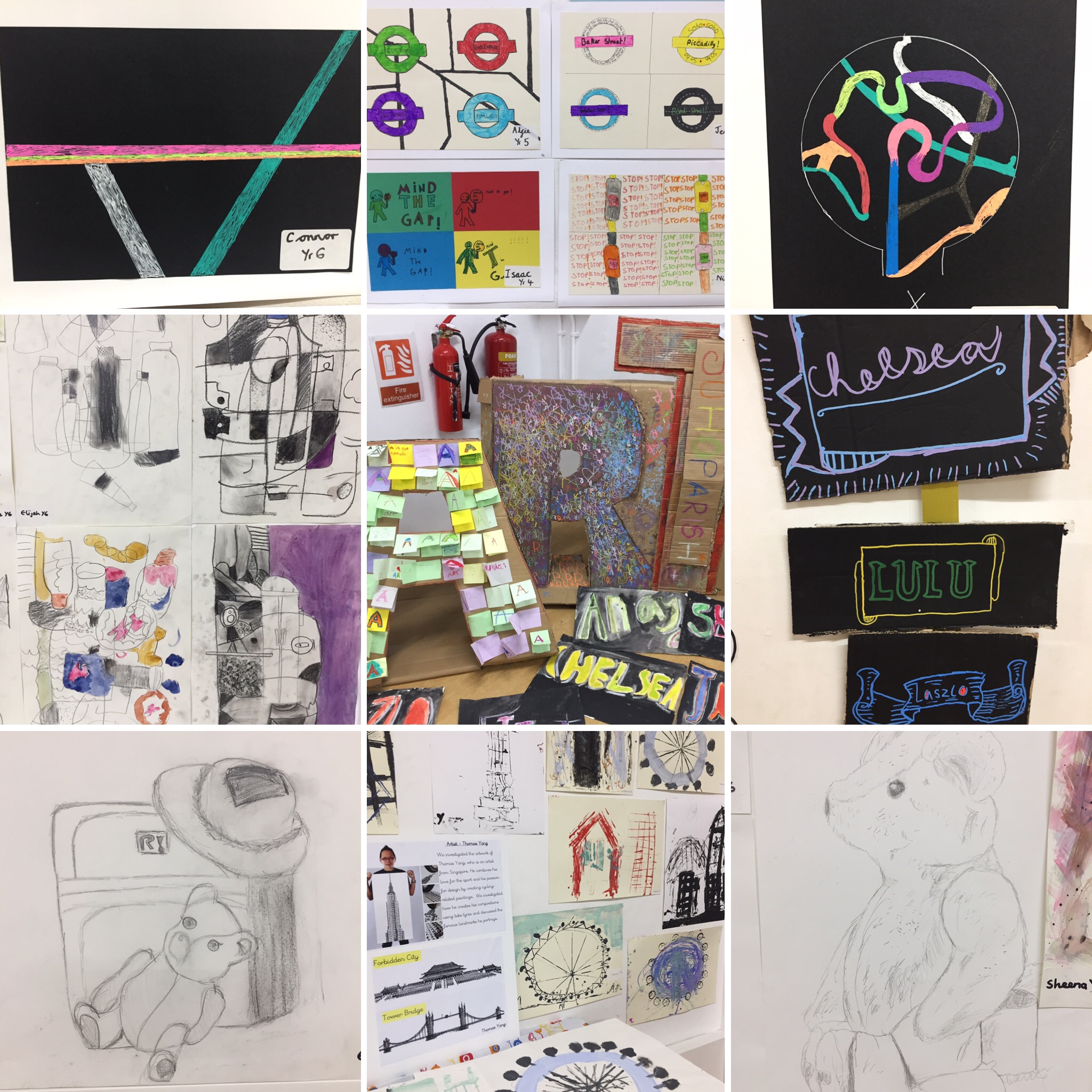 10. Measure the impact using before and after questionnaires and collecting quotes

To measure the impact, we collected quotes from the children during the workshops and also asked children to complete feedback questionnaires. 80% of our children thought that it was better to have children help to plan their Art Week.

A selection of quotes from the children:

We can give feedback that might not get through otherwise

The arts councillors are our age so know what we like

I think it gives children a chance to organise things. It will help them in later life

We also made a short film with the student Arts Council about their project and how they felt about it, which we were able to share with other schools an Artsmark Connects event, hosted by the London Transport Museum on ‘Embedding Student Voice’.

The children felt so excited and empowered that their voices were being heard and that their ideas actually came alive through the whole project. The Museum has documented the project too, which is on temporary display outside their transportorium learning space.