We were joined by sound artist and composer Lucy Claire at ANDInclusive. Read her experience of the week below

What a week I had at ANDInclusive at Tate Exchange! It was an incredible project and it was a pleasure to be a part of so much creativity with so many young people. There was a huge amount on offer for the schools to take part in and I was rushing around the space to capture audio from as much of the events as possible. I also spent a great amount of time in my sound tent engaging with small groups of young people and getting musical, vocal and percussive responses from them.

Each day we had a blank project and each day I collected hours and hours of wonderful and immersive sound. The result is a soundscape that presents moments of the day, which weaves in and out of other moments and spaces from that day. Sounds contrast with each other demonstrating the wealth of activities on offer and the diversity of people taking part. It takes the listener back and fills the space with the sounds of excited and creative young people as well as their learning support staff, art, drama and music teachers.

I really hope the young people enjoy hearing their experiences again as much as I do! I recommend listening to the tracks on headphones for a really immersive experience!

Here are my highlights of the week...

I spent a lot of my first day at ANDInclusive crouching in the middle of a Studio Wayne McGregor dance workshop surrounded by young people moving around me. The sound of their footsteps and laughter mixed in with workshop leader Jasmine's instructions and I was in the mix of it all. I was wearing my binaural headphones which accurately record the sound from my view point, which creates a sound recording that, when listened back to, transports the listener to exactly where I was. The workshops were amazing, the young people were thrilled and it was a privilege to be in the room.

The theme of my first day was movement and a lot of my day was spent moving between the Tate Exchange space, waiting at the lifts, and walking through the Turbine Hall to the Clore Learning Gallery where the dance workshops and more movement awaited. The sounds of the lifts pinging were perhaps most symbolic and the long wait for the lifts, and the impatience of some members of the public, highlights how difficult it is for less mobile people to move around public spaces.

Another highlight of the morning was listening to a couple of the young people from College Park explaining their installation. They really enjoyed exploring all the objects and recording the sounds that they made and telling me about them.

In the afternoon, my sound tent was open to the public and I collected some wonderful public responses to the young peoples' artwork. It was amazing to have the sounds of the young people still in the room during the afternoon, it was almost like they were still there. An art professor from Malaysia donated a metallic rhythm in the style of Rauschenberg’s metal series, some grandparents contributed sounds they make for their new grandson, a little girl told me about her piano lessons and composed a melody for the soundscape, and a lovely lady contributed a beautiful whistling melody!

Listen to a short version of the soundscape from day one

Accompanying the Village School to the Rauschenberg exhibition was a highlight of day two. They absolutely loved it and looked at all the work and exclaimed over the colours and objects in his art. One young girl, Iman, loved it and on entering all the sections of the gallery would say ‘wow!’ After the exhibition, I visited them at their station in the main space and collected some sounds of them making collages in response to the exhibition. They were so focused and engaged in the activity and one of the students, Jaina, the teacher told me, was much more vocal at the Tate than at school - she was even asking full questions and telling her exactly what she wanted.

I spent some time travelling around the school stations and seeing their installations and pictures. I wanted to focus on the unheard sounds and the small vocalisations the students make and I was able to collect a lot of these by going to the young people and being with them while they engaged with the installations. One school were using bubble wrap in their artwork and I got some incredible sounds of it being run over by students in wheelchairs. It was wonderful and sensory for the young people and was a delight to listen to.

I had a really lovely session in my sound tent with one of the girls from The Vale band. She was fascinated by the music technology and not only made some wonderful music and vocal parts for the soundscape, but also helped me edit and choose moments from the soundscape to highlight. She loved the sound processing and the stayed for about 45 minutes working with me. After this, I went with her to see her performance with Backdrop, The Vale School band, for the public. It was amazing and they drew quite a crowd!

Listen to a short version of the soundscape from day two 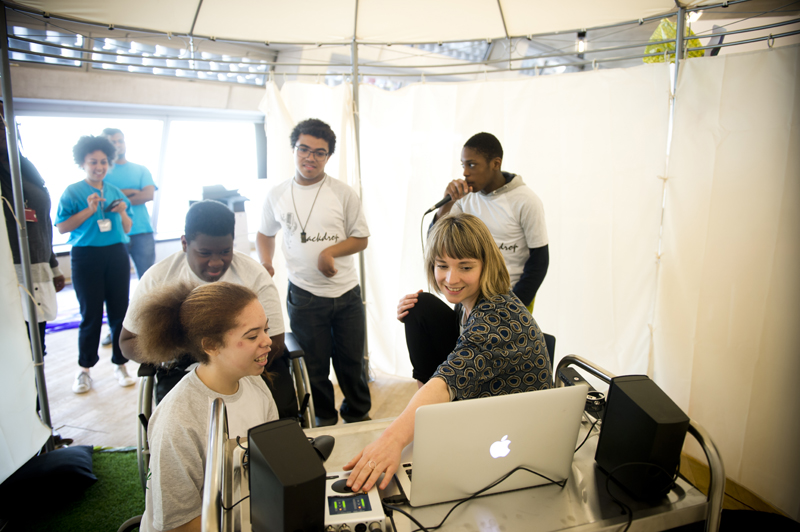 I spent some time working with Cambridge School playing a clapping game with them. They regularly play it in class, with one student starting and then the clap gets passed around other students. We played in the main space but it soon escalated past clapping to stamping, tapping the windows, scraping the metal floor panels, hitting the concrete walls. The sound was amazing and the students loved the different timbres. Alice, a student from Cambridge spent some time showing me animal sounds, she loved the way that they reverberated all around the big space.

Another highlight was joining Garrett Park School in their public engagement session outside The Louise Bourgeois exhibition. They brought along a papier-mâché spider that they had made in response to the giant spider in the exhibition. It was magnificent. The students invited the public to engage with them using pictorial diagrams. Students at Garrett Park use these diagrams to communicate and learn, and they were asking the public to tell them about their week using these storytelling timelines. I also accompanied some of the students into the Louise Bourgeois exhibition and had a great time engaging with the artwork and the students. The responses to this exhibition were very vocal and they absolutely loved being in the gallery.

Another highlight of the day was the drama workshop and performance that the boys from Garrett Park did of Odysseus. It was absolutely wonderful and the teacher was incredible, he had everyone involved. The sounds I collected there are beautiful.

Listen to a short version of the soundscape from day three

I accompanied College Park school to the level 10 viewing platform of the Switch House on day three and the students loved seeing all across London. I also went to the Rauschenberg with the same group of students and these sounds formed the bed of today's soundscape.

I also got to spend a lot of the day in the main space and in my sound tent which was really exciting. A lot of the young people visited me and we did beat boxing, rapping and music making in there. A couple of young people came and told me about themselves and what they’ve been doing at the Tate, encouraged by the microphone and the delay effect. One young man from The Complete Works also spent some time expressing some political views!

Another highlight was the music workshop. It was amazing to see the engagement and responses from the young people. I was sat in the circle participating and loved it. The parachute and physical and sensory elements of the workshop were wonderful and imaginative, there was a lot of excitement and positive responses. It made for a brilliant addition to the soundscape.

Listen to a short version of the soundscape from day four

Many many thanks to AND for having me as part of their team for their week at Tate Exchange and a huge congratulations on such a wonderful event!

Find out more about ANDInclusive at Tate Exchange