Cultural Action in an Earth Crisis

I’m a cultural learning researcher, increasingly focused on the role of arts & culture to tackle the Earth crisis. I founded Climate Museum UK and co-founded Culture Declares Emergency in 2019, and have been working with Flow Associates since 2006. Before that, I managed learning programmes at Tate, the British Library, and University of the Arts.

I was pleased to contribute to the Principles in Practice event exploring the ACE Environmental Responsibility investment principle. It was inspiring to hear from Paddy Dillon of The Theatre Green Book, Toby Peach of Young Coney, and Jack Welsh of the Liverpool Arab Arts Festival. I made some provocations about the responsibility that the Earth crisis demands of all of us, and I described the aims and cultural activism in the organisations I’m involved in. My slides contained a lot of diagrams so do take a look at them here.

I always talk about the ‘Earth crisis’ rather than the ‘climate emergency’, which is too narrow to include other kinds of environmental harm. Essentially, the Earth is now the Traumasphere, where nobody can fully escape the impacts of the emergency, particularly those intersectionally impacted by multiple issues. The impacts aren’t in the distant future, but at the stage of tipping points potentially toppling like dominoes. Some people are affected by ‘anticipatory loss’ or ‘future anxiety’ whereas others have been for a long time experiencing ‘climate distress’ and displacement. Any of us could suddenly find ourselves directly impacted, in a critically uncertain process that Alex Steffen calls the TransApocalypse. The root causes of this Earth crisis are the great acceleration of extraction of resources and our separation from nature.

So, what are some ways that I’m involved in organising a cultural response to this?

One is being part of the Culture Declares movement in which individuals and organisations in arts and culture can declare a climate and ecological emergency. Crucially, after declaring, they can form or join a growing community to enable them to tell truths, take action and seek action, not just to rest on a statement. There are hubs forming across the UK and the world, and a range of events and campaigns bringing declarers together.

The other way is growing a distributed and experimental museum, Climate Museum UK, which offers a collective platform for creative practitioners to engage people with ‘activations’ around the Earth crisis. Some of our principles and approaches include:

It’s vital to listen and involve audiences, especially young people, in these action plans. We in Climate Museum UK were commissioned by A New Direction to carry out a strand of research for their Listening Project. Our strand focused on the Earth crisis. The findings from listening to young people and adults that work with them included:

I concluded by reflecting critically on the ACE environmental responsibility principle. There was a lot of positivity about this being a new principle, that it will ensure the funded sector considers its environmental impact and agency. However, I suggested that the wording doesn't go far enough. The text of the three dimensions of the principle can be interpreted as being only about the operational sustainability of an organisation. Prompts about communicating and advocating outwards seem only to support inward-facing work. More explicit prompts are needed to activate eco-social change. 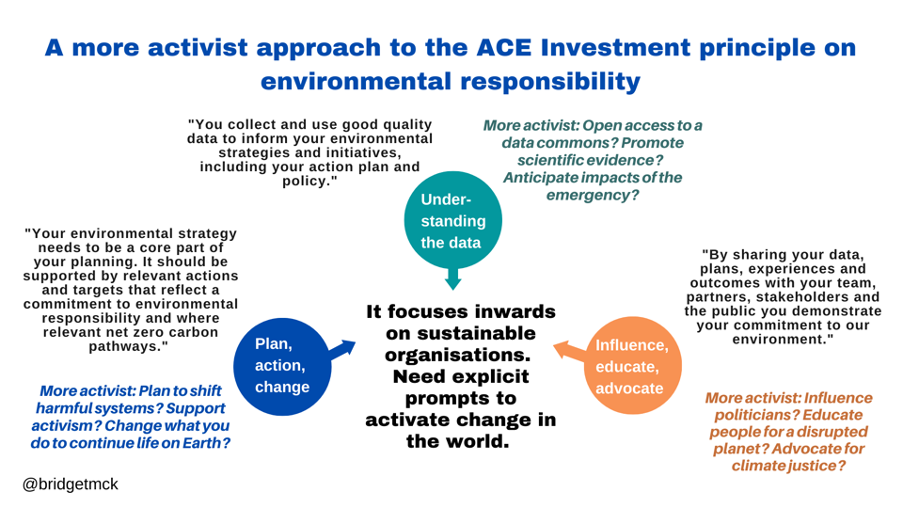 If you feel your practice is a great example of cultural eco-activism, do use the #CultureTakesAction framework to share it, and if you declare with Culture Declares, we can do a spotlight feature and collect your stories of change.

Ensuring programmes can better serve, and become more reflective of, our communities

What steps can be taken to embed environmental responsibility into programmes with CYP?

Stay in touch, sign up to our Cultural Sector Newsletter.