How do we remember and learn from the moment an audience of 1 billion people witnessed an integrated cast of performers open the London Paralympic Games? Was this just a moment in time or was it the start of real change? 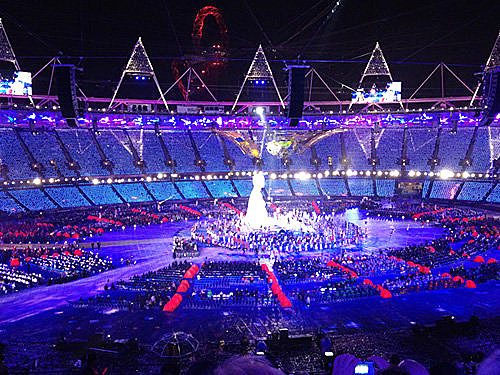 In 2012 A New Direction commissioned Eelyn Lee Productions to create a short documentary with young people from East London to tell the story of making the Paralympic Opening Ceremony.

As we prepare for the film to be shown at the East London Film festival and the anniversary of the Paralympics itself, I have been thinking about what 'legacy' really means - did this visibility of this moment change anything? Has our perception of disability really changed?

The truth is that in the year since London 2012 discussion of disability has focused on funding cuts, particularly to disability benefits, and once again the future seems very fragile for disabled young people – if not bleak.

A New Direction – the company I lead - is an organisation that works across London to connect young people to the best of arts and culture across the city. We initiated a whole series of programmes with schools and young people in the 5 year run up to the games.

The Film – All Eyes on Us - was an opportunity not just to be on the periphery but to put young people at the heart of a process, capturing the moment when disabled people were visible on a world stage in a new and extraordinary way.

After months of continual badgering we were granted 3 days access to rehearsals – once we were given permission - we found we had exclusive access to recording the rehearsal process. There were no other film crews recording the rehearsal process. There was no official archiving of a significant moment in British Disability Arts international visibility. Our crew of local young people were non-the-less welcomed and left to find their own way – a brilliant opportunity and quite a responsibility.

I have known and worked with Jenny Sealey (Co Director of the Opening Ceremony) for over 20 years. She is not only an inspiring and visionary colleague but also a great friend. For 5 years I was on her Board at Graeae – and Jenny was our route to the participants but also their stories. Our film, is an insight in to a process but also to the people who took part in that process.

Since making the documentary we have found limited interest and support to show the film - Paralympic fatigue? Or has Disability lost its cool?

I have worked with Eelyn Lee for over 15 years. Her work as a film maker involves active participation and collaboration. She spent 3 years mentoring, training and collaborating with a group of East London young filmmakers before undertaking this commission.

Stephen Bunce, the central character in the film found this experience to be life changing. For him, participating with an entire cast of deaf and disabled performers meant seeing himself in a new context, discovering new confidence and forming a new self body image. Jenny Sealey is currently working with Stephen on Graeae's new outdoor production called The Limbless Knight. She notes:

"I have been so aware of what a different young man he is now from the timid, agitated and fearful boy who entered my circus training space in May 2012 and being part of the filming process has also been an extraordinary part of his 'outing' himself as a disabled man and having the confidence to be who he is."

For the young people working on the film, some of whom themselves are deaf and disabled, the experience has informed and validated their identities as filmmakers in their own local area. So we have a story to tell to share that reinforces the value of participation but also of how the UK is a leader in Disability Arts.

"I love the film and I am hugely disappointed that Channel 4 decided against showing it and yet they are happy to ask me if my cast are interested in being in their series "The Undateables'. This is not the legacy I had in mind! All Eyes on Us is a positive and empowering legacy and needs to be seen by us all not only to allow us to applaud the skill and wisdom of our young film makers but also to highlight the physical and emotional journeys that are are ongoing and to open up the debate about disability"

I am bored of being part of a culture in the arts in the UK that never looks back, rarely reflects and focuses on what we have achieved and how we best move forward. We have a collective memory and something happened on the night of 29 August in the Olympic Stadium that we must never forget...

all eyes on us will have its public premiere on Sunday 30 June at the East End Film Festival and there will be a series of screenings leading to Disability Awareness Month in Islington.