What have the Cultural Citizens been up to?

Steven Smith, Learning and Participation Producer at Studio 3 Arts, brings us up to speed with all of the goings on from the Cultural Citizens programme.

The Cultural Citizens programme is an initiative funded by Arts Council England with support from The Department for Culture Media and Sport (DCMS). It’s a pilot project that will give young people in areas of low cultural engagement across England increased access to arts and culture. The pilot is being delivered by Studio 3 Arts and Creative Barking and Dagenham, in partnership with the Barking and Dagenham

Cultural Education Partnership and commissioned by A New Direction.

Below, Steven Smith from Studio 3 Arts updates us on what the participating schools

and students have been up to.

In the last fortnight: 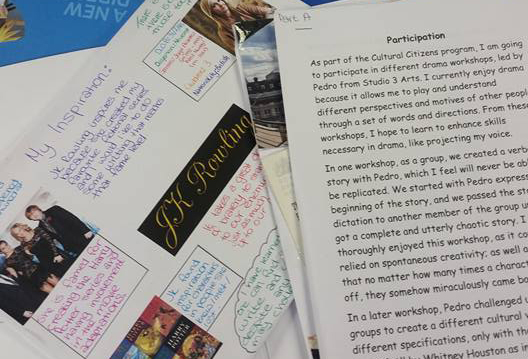 Fantastic work from Sydney Russell students to complete their Arts Awards - reflecting on their trips, the skills they have learned and what they want to do next in the world of arts. All the other schools are busy completing their portfolios for moderations happening this month.

Above: Eastbury students take part in a dance workshop with Big Deal at Studio 3 Arts

Eastbury school enjoyed their second trip with Cultural Citizens, meeting local artists and venues in Barking. They experienced dance, spoken word, improvisation and circus skills working with Big Deal artists, Roundhouse Collective poets and Living Room Circus. They were then treated to some fantastic performances from their artists and had a chance to speak to them about their careers and how to get into the creative industries. Studio 3 Arts has been happy to see a few faces back at Big Deal sessions since this trip!

Above: Sydney Russell students visiting the Barbican and taking part in design workshops

The Barbican once again welcomed Cultural Citizens as Sydney Russell explored the Japanese House exhibition, learned about design work with artist Carla Ferrari and watched the film ‘Speed Sisters' about the world’s first all-female racing-car driving team from occupied Palestine. Our documentary maker was there to capture some of the day, so keep an eye out for our film of the project coming in July.

And if all of this wasn’t enough, each school is also busy working with their artists to create something to share at our end of project Celebration Event. There are rumours of giant heads, living exhibitions, spoken word and even the return of the Cultural Gameshow… watch this space!
Main image: Eastbury students trying out circus skills with Living Room Circus
Subscribe to our newsletter