Or, why isn't comedy taken seriously? Following a trip to the Edinburgh festival, AND's John McMahon ponders the sometimes overlooked value of comedy as a vehicle for cultural learning – including social, cognitive, health and pedagogic dividends. 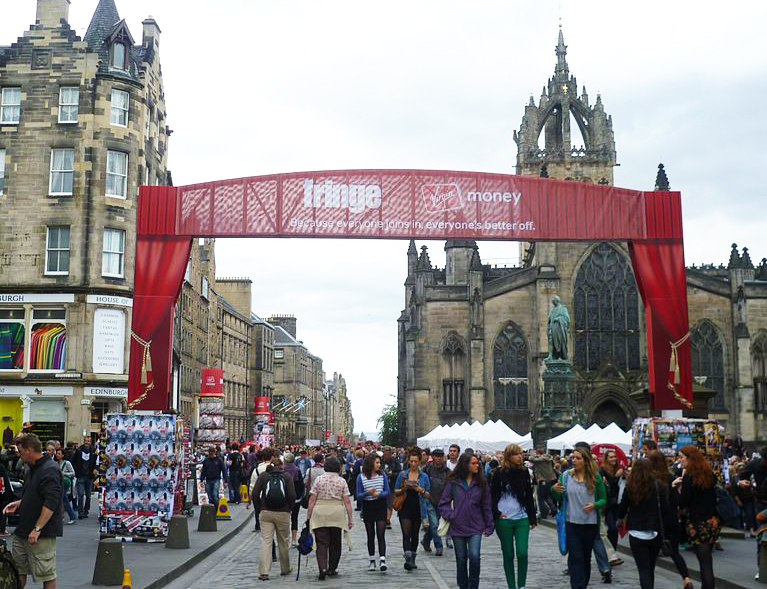 The Edinburgh Festival which takes over Scotland's capital each August is often reported to be the largest arts and cultural festival in the world, with both renowned and aspiring artists, producers and curators (as well as committed enthusiasts and curious tourists) flocking annually to the city to drink in the heady, electric ambience of the whole affair.

It's probably a safe bet that – if asked to name the artform most synonymous with this festival of festivals – the majority of people would without hesitation cite comedy as both the central substance and the crowning glory of proceedings. In fact, comedy actually makes up more than a third of the programming at Edinburgh in any given year.

I've been fortunate enough to visit the festival four times since 2008, but whilst planning what to see during my trip this month, I got to wondering – if comedy has pre-eminence at such a prominent arts festival, and since some of the best, most moving, most intellectually stimulating 'art' that I've seen has been comedy-shaped (through the likes of Josie Long & Daniel Kitson), why is comedy often seen as a poor relation to other art forms, routinely overlooked for both plaudits and funding?

And also, what special value for learning does comedy offer in and of itself, or when utilised as a tool in other cultural learning contexts?

My curiosity was further driven by the fact that the best show that I saw at Edinburgh – Bridget Christie's award-winning 'A Bic For Her' – was both utterly hilarious and immensely thought-provoking, highlighting with gleeful defiance and absurdist exasperation many of the rotten contradictions faced in the on-going struggle for true gender equality.

A bit of digging revealed that the first of these questions – 'Why isn't comedy funded by the Arts Council?' has been addressed in the relatively recent past by The Guardian, with a rough consensus that the matter boils down to:

1) the fact that much day-to-day live comedy is conceived and consumed as 'entertainment', and lacks the heft or ambition to be considered 'art'; and

2) that comedy has an existing, commercially sustained ecology that already-stretched funding bodies like Arts Council England are loathe to meddle with (in both respects, there are many parallels with the broad sphere that shorthand dictates we call 'popular music').

The second question, however, still intrigues me, so I'm going to share some of my own initial thoughts, and the observations of others (gathered through the GEM Jiscmail and the Chortle and British Comedy Guide forums), here; I invite you to contribute to the discussion by commenting below, or by emailing me.

For starters, comedy brings a wide range of well-acknowledged SOCIAL and interpersonal communication benefits. As Ant Hill on the Chortle forum notes, "When people write a dating profile they invariable place "good sense of humour" as a key required attribute in their partner... i.e. it is a quality we value above most others in the people we wish to form close relationships with."

A grounding in the dynamics and technicalities of humour can make us more skillfuland effective communicators, better able to establish rapport, to memorably convey key information, and to tailor our messages (even on-the-hoof).

Comedy also gives us some of the most powerful points of shared reference through which we can understand and bond with others; whilst, as this fascinating piece details, comedy can be used to build communication and conflict resolution skills, even for vulnerable learners in environments like prisons and youth offending institutions, where a lack of such proficiency can seriously undermine future individual life chances.

However, BenS on the British Comedy Guide forum flags up an important distinction about the type of comedy that has value – "Whereas mature comedy might be based more on irony of shared experiences and that whole 'laughing with,' immature and comedy is laughing at. The two leading to very different mindsets."

BenS also spoke of the potential COGNITIVE gains to be made through humour – "It seems to me that humour is a brain building activity... comedy makes the brain work harder in trying to understand what the joke is in order to reap the positive reward of the feelings attached to laughter. When someone transitions from not getting to getting a joke, they literally go through a paradigm shift and the brain retains that understanding. Once you get a joke you can never go back to not understanding it."

This also brings us to WELLBEING, as comedy is widely understood to help subjects deal with stress and grief, and to raise resilience, optimism and self-esteem. Laughter has even "been shown to benefit your circulation, lungs and muscles."

As well as these benefits for the learner, it seems there are also a host of PEDAGOGIC benefits for educators.

For as start, as Dave Graves, WWI Project Officer at Wardown Park Museum, Luton observed through GEM, "If people are enjoying themselves whilst listening to you, then they will pay more attention and will learn more."

Joe Perry from Stoke on Trent Museums and Anne-Marie Gill from Bexley Heritage Trust concur that a humourous approach helps learners to 'relax', and creates a 'friendly and welcoming' environment.

Beth Hawkins from The Science Museum also sent through some great examples of the use of humour in their sessions and materials, noting that they find that comedy is a "good hook and grabs peoples' attention to help us communicate the science, and the messages we want to get across."

Liz Garnett, a former university lecturer who responded through the Chortle forums, says that she used to use jokes to refresh attention ("you've not had a tough audience until you've had to lecture in the 9am Monday morning slot"), and to test learning ("if you crack a joke about the subject you're teaching and the class laughs, that shows they have grasped it well").

Liz also speculates that with younger groups, encouraging learners to use parody to produce pretend historical documents could be used to build understanding and "get a sense of creative manipulation of concepts and/or stylistic elements of the material under scrutiny"; she also notes that "comedic devices such as exaggeration or literalism" could be used as "techniques to develop critical thinking".

A further suggestion of Liz's - getting children to write topical jokes, Now Show-style, for particular historical periods – is echoed by Matthew Sheard at the University of St Andrews Museum, who is already using this approach with university students – the thinking behind it being as follows:

"The aim of the events has been audience development, bringing the collections to the attention specifically of students and allowing them to learn about them in a fun way. It began when we discovered through audience research that science students didn't think we were relevant to them, despite our nationally significant scientific collections. For this reason we held 'Mock the Sciences', mainly to bring these collections to the attention of these students who maybe didn't realise that we had them.

The research had suggested many in this group enjoy comedy, which is why we decided to combine the two. It worked a treat, around 60% of those who attended had never engaged before, so we did it again with non-scientific collections. It's a good way of engaging a different group of people. We also make sure that the audience members do learn in the same way that you learn what's going on in the world by watching those aforementioned TV shows."

So, it appears that there are both practical and lasting benefits for both learners and educators (and even institutions, in terms of unlocking new audiences).

Dave Grave sums up the challenge and the opportunity well, pointing out that "As museum educators we have an even greater need to make it fun. The kids are on a day out, I repeat, a day out...They do not want more of the same! They want to see things in a different light, they want to enjoy the day... Horrible Histories use comedy, they are all comedians and/or comic actors and look at the ratings and see the number of children who can name the monarchs of England because of 'that' song."

However, I was also impressed by some comments made by a British Comedy Guide forum inhabitant with the enigmatic username 'Horseradish', who cautions against yoking comedy too firmly to 'academic rigour', noting that its purest application is 'to emphasise spontaneity' and nurture 'a childlike joy' that "should begin in life much earlier and be carried through every adulthood to the grave."

That sums it up nicely for me, then. Great if humour helps teachers to control a class; great if it helps children to remember the succession of monarchs, or other details; but the greatest potential gift of all that humour in education can offer is an understanding that learning, and life, can be approached with a sense of joy (and an appreciation of the absurd).

So let's all champion the use of comedy in learning – such rewards are too precious to be a laughing matter!