In addition to being Programmes Manager at A New Direction, Louise Barnell is also a sound artist and musician. Hear some of the work she did with students at ANDInclusive 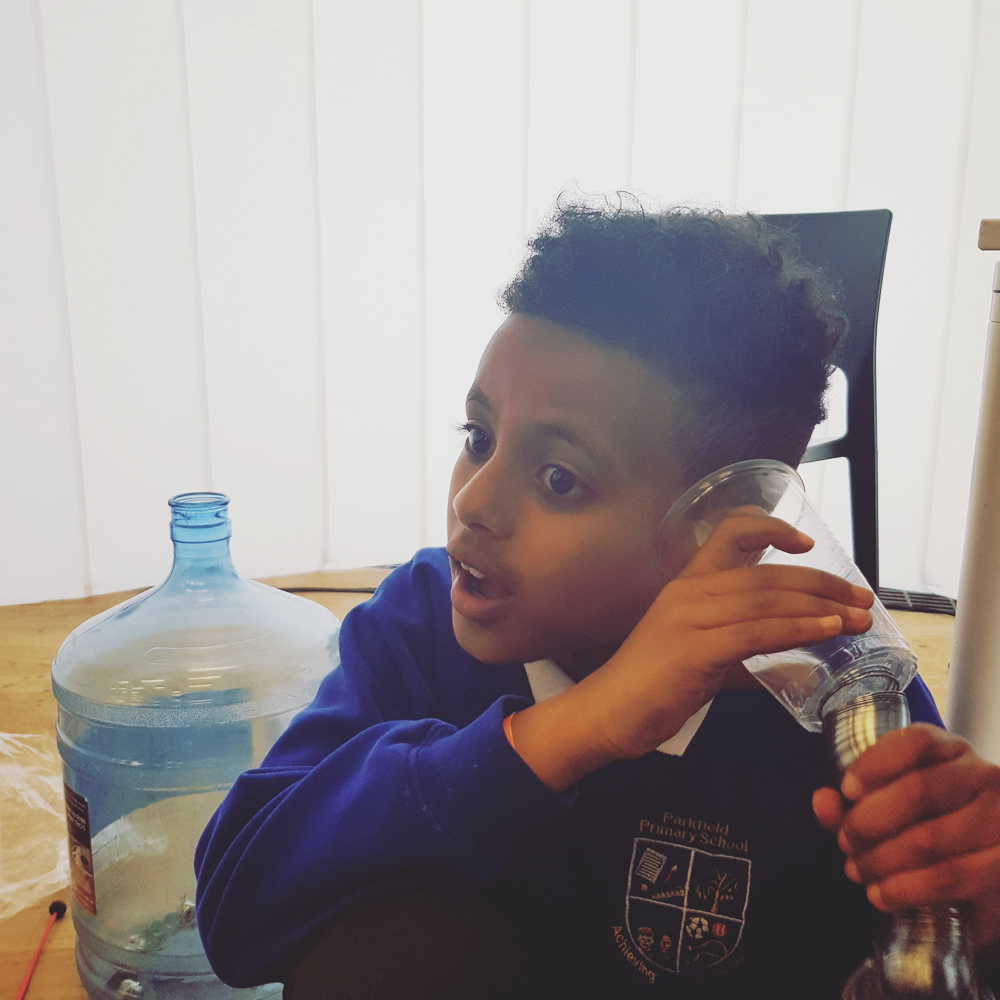 As well as managing a varied portfolio of programmes which support the cultural sector to develop best practice in children and young people’s creative learning at A New Direction, I’m also a Sound Artist.

Sound can open up new ways of understanding space. I often work in underused sites such as St Augustines Tower in Hackney, or the High Tide Sea Organ In Blackpool with a collective called Breathing Space to engage audiences in new ways of thinking about their surroundings and places they take for granted. Shape, form, history and acoustics all play a part in scoring work.

Perhaps partly due to the fact that I am not classically trained, I am also particularly passionate about inclusive approaches to music and sound-making. I believe everyone can score music simply by using their voices, thinking about their surroundings, and by feeling and listening. My solo work explores the body as an instrument, and I often use everyday objects and textures in my work along with techniques such deep listening that people of many abilities can easily use to make really beautiful and intriguing sounds.

I was delighted to deliver two workshops as part of ANDInclusive - a week-long takeover of the Tate Exchange led by A New Direction and our SEND Network. The aim of the project was to increase the presence of children and young people with special educational needs and disabilities in cultural spaces, and connect and inspire teachers with innovative practice. Students responded to the themes of 'Production', 'The Seen and Unseen', and 'Materials and Objects'. They combined thoughtful responses and talks on artworks in the main galleries, and joyful creative abandon using mixed materials, music, dance, drama and sculpture. I recorded happenings across the Tate Exchange in a soundwalk - listen to this below.

My workshops took place in a brilliant white inflatable dome – thank you Tate Exchange! - and focused on the relationships between sounds made by everyday objects. Using textures and objects in this way lends itself well to inclusive listening, and is also a great way of reclaiming our surroundings. Students in the workshops ranged in age, learning styles and abilities, so this approach was also useful for making sure the workshop was as inclusive as possible.

We started by very quietly listening to specific sounds made by group members, before beginning to combine sounds and textures into a live composition and playing with levels of volume. Some students decided to add vocals by chanting or shouting, others enjoyed playing with the spectrum of soft to loud sounds, exploring different ways of holding objects or using the floor as an instrument. In one workshop we travelled across the space, creating a sonic procession where sound became part of a physical takeover of the space which members of the public also engaged in.

I used textural materials such as rice, marbles, springs, and bells to create instruments of varying sizes that can be played in unconventional ways. For example, I brought along large water containers and filled them with bells, which the students could roll across the floor or pick up and shake. A listening device I made from plastic cups connected by a metal slinky was also a big hit - when you put it to your ear it makes a sound like a laser! I’m told they used a similar technique to do the sound effects in Star Wars.

Corrugated card strips, pebbles, and shells on cloths on the floor made for a good sonic exploration for those who were more tactile learners - allowing them to use their hands as beaters to scrape and strike. Rice was also used in abundance - bouncing around on reverberating surfaces, and making great swooshing sounds in a variety of containers. Foil, and metal baking trays also created a lovely scratchy, grating, rolling surface for small items, and wooden spoons made brilliant percussive instruments. We also made megaphones from card to change the directional projection of voices, so they can bounce far across a room. I hope teachers were also inspired by how cost-effective sound-making can be when using readily available objects.

Listen to the student’s live compositions and sonic procession below