EU calls on the arts to empower & integrate refugees 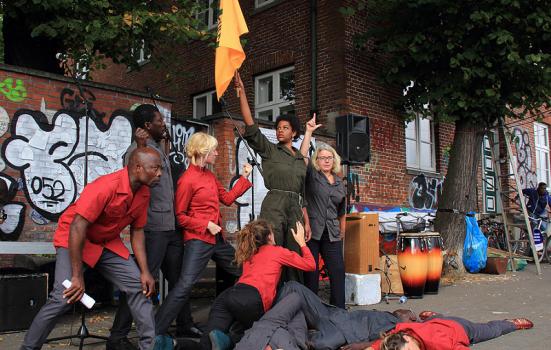 EU calls on the arts to empower and integrate refugees

The UK and Poland were the only EU countries that didn’t contribute to a major new report on how arts organisations and policy makers can help migrants. Read more

AND Advocate Kerri Sellens tells Schools Week how her school has come up with a lucrative business model, with pupils selling original works of art to raise money. Read more

The site has been designed in consultation with local kids and offers a host of games, quizzes, videos and activities inspired by art, including creative challenges to do at home and a gallery where children can share their own art. Read more

London's Donmar Warehouse is to stage a series of workshop performances in collaboration with Parents in Performing Arts, based on the experience of becoming a mother. Read more

London-based theatre organisations including the Barbican and the Old Vic have launched a network dedicated to improving support for artists and promoting theatre. Read more

Described as "virtual reality for radio", Theatre on 4 will record a production on stage in binaural sound and in front of a live audience. Read more

Last few places left for this half-day session for NPOs and cultural organisations that would like to find out more about the Artsmark process. Find out more

A contemporary response to Queer British Art 1861-1967, exploring what queer nightlife means to many Londoners today. Find out more