Art On The Underground learning resource

Learning Guide to accompany 'The Bureaucracy of Angels' film

A New Direction has worked with Art on the Underground to produce the learning guide to accompany 'The Bureaucracy of Angels' - a 12 minute film by Broomberg & Chanarin on display from 28 September–25 November 2017 at King’s Cross St. Pancras Station.

The Bureaucracy of Angels records the demolition of 100 migrant boats in Sicily in the winter of 2016. These boats arrived laden with refugees from North Africa, and while their human cargo were either sent home or absorbed into the asylum system, the boats themselves were never returned to their owners, laying beached on the concrete forecourt of Porto Pozallo in Sicily.

Broomberg and Chanarin have a long history of working in war-torn countries and areas of conflict. Their research on themes of migration and movements of people lead them naturally to the current migration crisis. The artists visited Sicily a number of times where they were able to explore the area where migrants arrive from perilous journeys across the Mediterranean. They filmed the rescue missions by the Migrant Offshore Aid Station (MOAS) foundation off the coast of Libya as well as the destruction of the boats left to decay once the migrant journeys have been made, in a vast shipping graveyard in Porto Pozallo in Sicily. 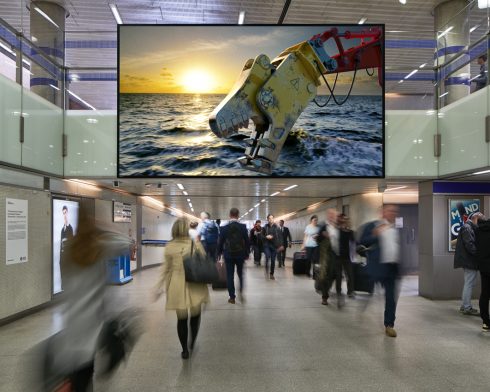 The aim of the Learning Guide is to inform and inspire teachers in secondary schools and colleges, as well as those working with young people towards an Arts Award Bronze, about the commission ‘The Bureaucracy of Angels’ (2017). This resource also looks at how art and culture can offer new perspectives on issues raised in contemporary society and their relevance to young people who are exploring their own identities, journeys, representation and place within the world.

Art On The Underground are also running a poster competition to all schools and colleges based in the Greater London area. The winning design will be chosen by the artists, then produced by a professional designer and exhibited at the winner’s local Tube station and featured online.