World languages for a world city

Exploring the languages spoken by young people in London schools. 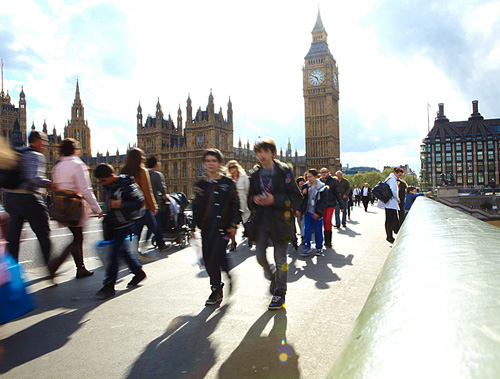 We live in a city characterised by diversity. People from all over the world living in London embrace and share diverse and abundant cultural manifestations and traditions including their own language.

Around 100 different languages are spoken in almost every London borough and this diversity becomes particularly evident in every school.

Every day thousands of pupils take classes in English even though this might not be their first language.

According to data from the 2008 Annual School Census, 40% of London pupils speak English as a second language - with the top ten languages spoken in London schools being: Bengali, Urdu, Somali, Panjabi, Gujarati, Arabic, Turkish, Tamil, Yoruba and French.

The Daily Express recently published an article about Oasis Academy School in Croydon, which is thought to have the highest number of languages spoken in any British School. According to the newspaper, the academy in South London has 1,539 pupils, aged four to 19 speaking 69 languages with 422 speaking English as a second language. Mother tongues among pupils range from French and Turkish to the Caribbean dialect Papiamento and African tribal languages Oshiwambo and Wolof.

Languages for the Future and their relevance for London schools

The British Council has recently published a report, ‘Languages for the Future’ that reveals some interesting findings about the diversity of languages in Schools around England (particularly for London), and how important some other languages will be for the country in the next 20 years.

The report lists the ten most important languages for the UK’s future based on 10 different economic, cultural, geopolitical and educational indicators, as;

I was quite fascinated by this and was keen to delve into a bit more detail:

In 2010 there were some 20,000 Arabic speakers among London schoolchildren, making Arabic the sixth most commonly spoken heritage language in the capital.

A-level Arabic was also introduced in 2002 and had 299 entries, rising to 604 in 2012, making Arabic the tenth most popular language at A-level.

In London alone it is spoken by over 13,000 schoolchildren. French remains the language most often studied at A-level.

At primary level French dominates with 74% of schools offering pupils tuition in French.

According to figures from the Department for Education, in 2011 there were more than 13,000 speakers of Spanish in English schools, making Spanish the 14th most commonly spoken language by schoolchildren with English as an additional language.

Also the number of Spanish-speaking schoolchildren in London grew by 57% in the period 1998 to 2008.

Spanish is also now the second most popular language at A-level after French, having overtaken German in 2005. This is useful, as Spanish will be the most important language in 20 years time.

Figures from London show that the number of schoolchildren speaking Russian has more than trebled in the decade 1998–2008.

At Higher Education Level, German remains the third most widely offered language with more than 60 universities across the UK offering degree level courses.

At school level, interest in Italian is particularly strong in the independent sector.

Just over 1,000 pupils took a GCSE in Japanese in 2013, which represents an increase of about one third over ten years.

In 2011, the Department for Education census revealed that there were some 16,500 Chinese speakers (a distinction was not made between varieties of Chinese) amongst English schoolchildren with English as an additional language, putting Chinese in twelfth place.

Entries at A-level, however, have grown rapidly to 3,425 in 2012, making Mandarin Chinese the fourth most popular language after French, German and Spanish.

Portuguese is the eighth most commonly spoken language among pupils in England having English as an additional language. Figures from 2011 show that 22,660 schoolchildren were speakers of Portuguese as a first language.

Turkish is the 11th most frequently spoken language by English schoolchildren with English as an additional language.

The British Council suggests that young people should be given opportunities to sample a range of languages and cultures during their school years. It also suggests that the teaching and learning of languages should be enriched by the inclusion of new languages in the curriculum, and an increased focus on the need to understand other cultures.

What could this mean for London?

As such a diverse range of languages are so widely spoken among pupils in schools in London, are we already ahead of the curve? Can we be confident that we have a powerful bilingual future workforce in the waiting?

By acknowledging and valuing the importance of this landscape of languages in London schools, and understanding the potential economic importance of such diversity, we can nurture a culturally diverse generation of future leaders.