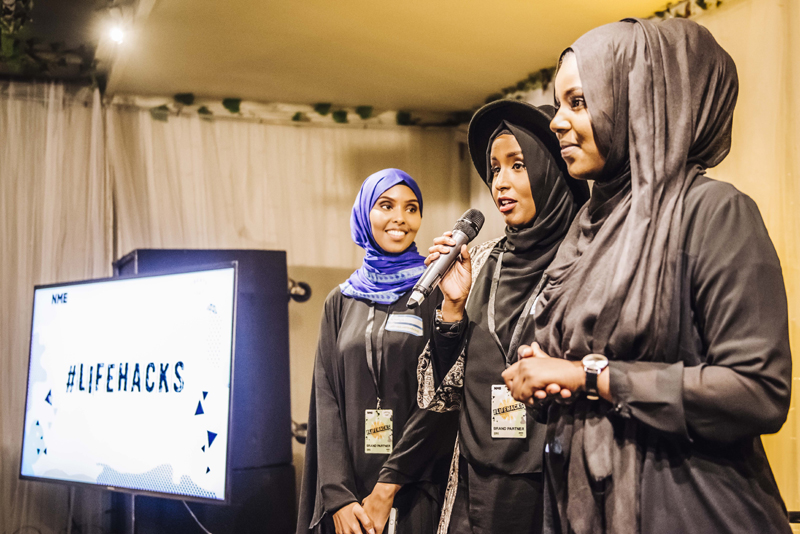 After months of planning, researching, debating and decorating, #LifeHacks finally came to fruition on Thursday night and went off with a total bang! Swarms of hundreds of young, enthusiastic people queued up in the cold to grab their chance at being the first in the door and soaking up as much inspiration as they could.

The event kicked off with headline speaker, Jamal Edwards MBE, straight talking about tenacity and hard work to achieve his goals. The 26-year-old, who comes from Luton, wanted to prove that coming from a modest background does not mean you can’t win - “Make a list of the top 5 people you want to meet and don't stop until you meet them.”

The night then carried on with a series of workshops – 'Behind the scenes of Google Creative Lab' with creative lead Tom Seymour in one room, whilst the other room had 'Building Brand You: the secrets to being successful online' with Paul Davies (CMO Microsoft – check out his awesome guest blog here), Hannah Beesley (Iris Social Director), Alex Stedman (The Frugality) and Charlotte Gunn (NME Digital Editor). Both explored the importance of technology in the future of the creative industries.

The second round of workshops were 'Play From Clay', with global animation studio Aardman – a truly interactive and creative workshop (that frankly we can’t wait to book again!) - and 'Getting Ahead in the Fashion Industry' with Topman’s Creative Director, Gordon Richardson.

The final panel of the day invited Phil Kemish (Disrupt), Dumi Oburota (Disturbing London), Holly Fulton (fashion designer) and Heydon Prowse (BAFTA winning comedian) to speak about ‘What [they] wish [they’d] known in my twenties’. Dumi got an especially warm reception; there were a lot of music management fans in the room.

Throughout the night the Hack-spaces were open upstairs – a selection of live interactive workshops from Create Jobs, D&AD, Jessops, Topshop/Topman and Smashbox. Each space allowed the public to get involved through various mediums. E.g. mindfulness with Create Jobs, makeovers with Smashbox and how to dress for interviews with Topshop/Topman.

And we were delighted to be joined by the Network + Chill girls; a slot all about networking with creative professionals, including all the panelists and speakers, as well Create Jobs staff, NME staff and other young creatives. These guys are awesome, and we thoroughly recommend their future events. Also, check out our blog on networking with other cool events here.

Refreshments on the night were supplied by Glaceau SmartWater, Propercorn, MOJU and of course plenty of FREE pizza from Voodoo Ray’s. All that networking made for hungry work!

The event culminated with a Disturbing London take over gig from 9pm – featuring Tinie Tempah with support from The Indien and A2. The intimate gig space was brought alive with both Tinie and the crowd giving it every bit of energy they had!

This sold out event was attended by more than 400 people. We hope that everyone that attended or got involved, enjoyed it just as much as we enjoyed putting it together.

If you attended, and learnt something valuable or inspiring, please email us at createjobs@anewdirection.org.uk quoting “Life Hacks” – we love hearing your thoughts, feedback and encouragement.

And of course, if you missed out on this event, don’t fret, we have plenty more exciting things to come!

Watch a highlight video below: