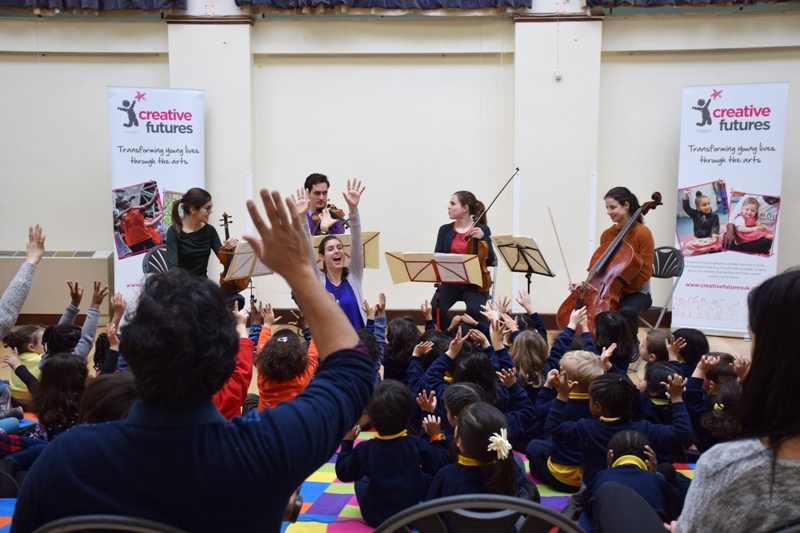 On 1st March 2016 we held a free interactive classical concert for under 5's called 'Spectacular Strings'. The concert took place across one children’s centre and one community centre in north Westminster, and formed part of our Cultural Education Challenge project, 'Music For Change.' Pupils from several of the local nurseries in which Music for Change is taking place attended, as well as local families with young children.

There was a lively yet attentive atmosphere in the hall of the Beethoven Community Centre where the larger of the two performances of Spectacular Strings took place. The children all sat together on a large picnic style mat directly in front of the classical musicians, and both the children and adults encircled the artists - giving the concert a friendly and dramatic atmosphere. When the string quartet began to play, their instruments were up-close, loud, and engaging for the whole audience.


Performing at Spectacular Strings were the Alauda Quartet. Formed in 2011, the members are all former students at the Royal Academy of Music and have performed at concerts and festivals around the world. The four performers - made up of Cristina Prats-Costa (first violin), Milan Berginc (second violin), Rhoslyn Lawton (viola), and Elena Cappelletti (cello) - were delighted to have the opportunity to bring their music to an audience of under 5's who were all extremely excited to see and hear them play. For many of them, this was their very first concert!

Leading the interactive performance with the children was Ruth Rosales - a professional bassoon player who has presented children’s concerts for the City of London Sinfonia, Multi-Story Orchestra in Peckham and many more. Ruth introduced us to the music, teaching us what special sounds to listen out for and leading interactive games. These included throwing both hands up in the air when the higher pitched notes were played by the string instruments, and thudding the floor with our hands when the lower pitches were played. The games ensured that everyone was continuously engaged by the pieces – including the parents and teachers.

All in all, Spectacular Strings reached over a hundred children and adults and provided an experience of live professional performance in an area which has some of the highest rates of child poverty in the whole of the UK. For many, this was the first time they had ever been to such an event. The hugely positive feedback we received from parents after the concert illustrates the importance of continuing to provide musical and artistic programmes for the Early Years such as this:

‘We absolutely loved it. She was wriggling her toes all the way through and looking interested in the instruments.’

‘It was really nice and stimulating to hear some actual instruments, makes a change.’

‘I don’t get to hear or see live music so this was very good for us.’

A bit about us…

Creative Futures provides accessible, inclusive and engaging arts projects in Early Years education, often reaching out to families and children who have few opportunities to access creative programmes. As part of our Music For Change project (supported by the Cultural Education Challenge, among other funders) we are researching how weekly music workshops, alongside special events such as the Spectacular Strings concert, can help prepare young children for school and enhance their early development and academic potential.

The project is reaching more than 300 children every week through musician-led workshops in nurseries and children’s centres, and is being delivered by a team of 8 musicians. We are also working closely with teachers and have an exciting partnership with NHS speech and language therapists in one of the nurseries where we are discovering the huge value of working collaboratively on the development of early language skills. As we continue to research the impact of the programme with colleagues from the UCL Institute of Education and Roehampton Universities, we also get a chance to occasionally sit back and watch children from all backgrounds enjoying a live and interactive music performance, such as at the Spectacular Strings event. It is our hope that this early access to a high-quality cultural experience will imbue a love of the arts and creativity within the children that will stay with them as they grow.

Join our mailing list to keep up to date with our projects and areas of research: www.eepurl.com/Q6ay1