AND pushes to broaden school/arts partnerships in London 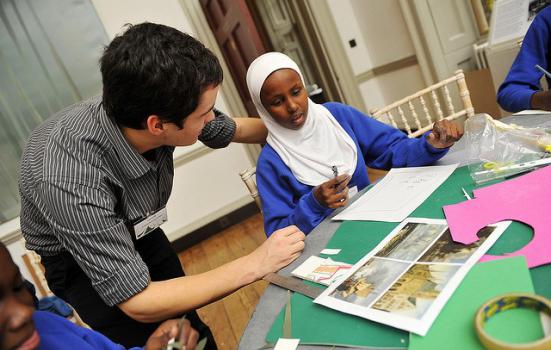 AND pushes to broaden school/arts partnerships in London

As reported by Arts Professional, schools and arts organisations in London are being encouraged to connect via a new online platform - ANDtogether. The website, launched in Beta, invites arts and cultural organisations to upload a profile page to the site so that teachers can find their details. More info

Touring theatre company Sell a Door has launched a writing programme for young people to create new drama inspired by south-east London. Ten successful applicants aged 16 to 25 will join writing and producing workshops at Greenwich Theatre over the course of 10 months. More info

Battersea Arts Centre, Watermans and Greenwich & Docklands International Festival have been awarded a combined investment of £3,040,861 for their touring programmes in the latest round of the Art’s Council’s strategic fund. Read more

In an interview with the Evening Standard mayoral candidate Sadiq Khan unveiled his arts policy which includes ensuring the outer boroughs have better access to culture, and a plan to save small music venues. Read more

Diversity campaign Act for Change has become a registered charity in what has been welcomed as a major step forward for minority representation on and off stage. Read more

Sir Peter Bazalgette will leave at the end of his term of office in 2017 to pursue other opportunities. Bazalgette has chaired ACE since 1 February 2013 and will remain in post until his tenure ends on 31 January 2017. Read more

The research, conducted by ComRes, shows the different ways older people value arts and culture, and highlights how arts and cultural activities could potentially help to tackle key social issues such as loneliness and isolation. Read more

The Keats-Shelley Prize is an annual competition for essays and poems on Romantic themes. The new essay class for 16-18 year olds, now in its second year, forms a part of the Young Romantics Prize. More info

This free online course, led by film education experts from the British Film Institute (BFI) and film education charity Into Film, will examine the debate surrounding film as a vehicle for teaching literacy. Book here

'Taking Risks' is a three-year evaluation report commissioned by Ovalhouse and conducted by Centre for Urban and Community Research, about participatory arts with disadvantaged children. More info

Dulwich Picture Gallery's grounds will be ablaze next month as they transform into a fire garden. For two evenings, visitors will be able to stroll along flame-lined paths and copper fire-breathing flowers will be installed. More info