When young London came together

Bemi was one of our recent Creativity Works graduates. Read her round up of the programme below...

The Creativity Works Festival and Live events programme brought together a group of 20 under 25-year olds - aiding us in completing the live brief set. In our case this was to create a live event in 6 weeks! On this summer’s course we visited a bunch of festivals, analysing how they were put together and were given workshops in order to help with the planning of the final event.

The 20 individuals on the course all had their own reasons for being here - some to try new things, some to build their confidence, some to build career skills and so forth. With this in mind, we filled in the first few pages of our booklets and wrote about what we’d like to work on individually. We were then given the choice to work in 4 groups, which would then help us develop the interested skills. These were marketing, design, artist liason, and AV/tech.

As soon as we chose the groups we wanted to work in, we got down to work fast.

The pressure was on! 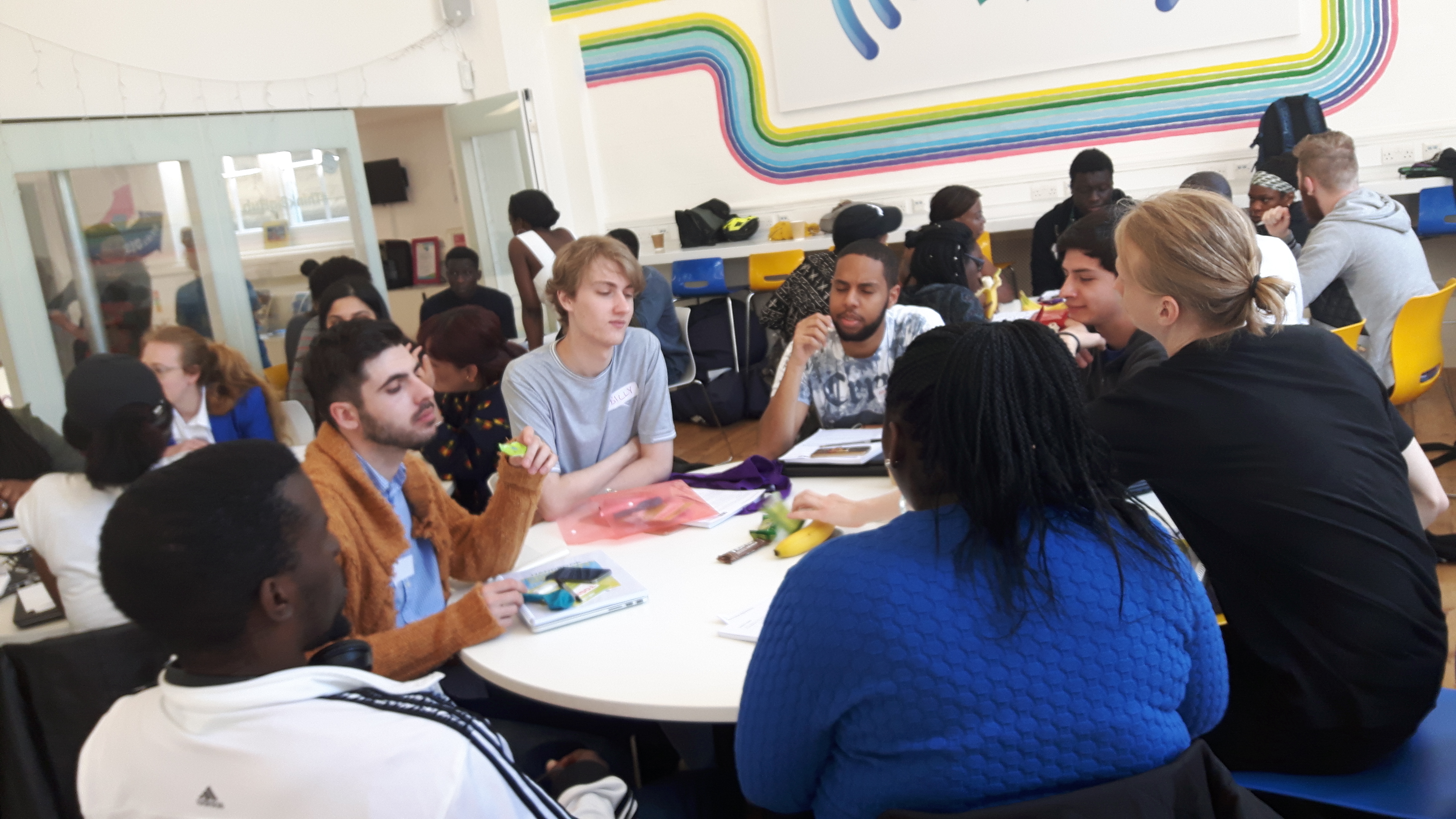 Pre-event preparation, problems and getting the job done

This first week and a half was the most hectic week with all the different workshops, locations and events we had to visit in order for us to gain inspiration and write our blogs (the blog was a course requirement in order for us to receive our Arts Award).

Some will say that the AND/Create Jobs team tried to kill us that week! That’s neither here nor there but we were definitely overloaded. Though taxing, it was an interesting learning experience… we got a taste of being young creative professionals very fast!

A variety of established practitioners who’ve worked on events or specialise in our fields of interest (specific to the groups we were in) came to visit us, explaining their journey, giving us tips and tricks, and a bit of feedback on the ideas we had so far.

After this, we continued to have weekly meetings within our task groups and with our event manager Louise.

It was very difficult at times; we had 4 groups, 20 different people and we were not always able to meet with each other. This created a lack of faith throughout and as a result stronger communication was needed.
I’d say lack of trust and communication was or biggest downfall, but also something that was understood. We used Facebook and WhatsApp more towards the middle as a whole group to help with this problem. Google Drive was also very active during our project and whatever you needed from the other team was generally uploaded on there. We could only try, and try we did!

Of course, it would’ve been ideal for everything to be ready when needed, but given the time frame, we had to work with what we had. Once a few acts were confirmed, along with a few attractions such as food, it was go time for the marketing team. The creation of the invites, press releases, and social media designs could begin.

As time went on and stress grew, there were team arguments, mini break downs, missed deadlines, delegation of tasks, set backs, lack of communication once again… but we had to resolve this and get the job done.

Thankfully we weren’t alone; we had Louise once again to help with any difficulties we came across. 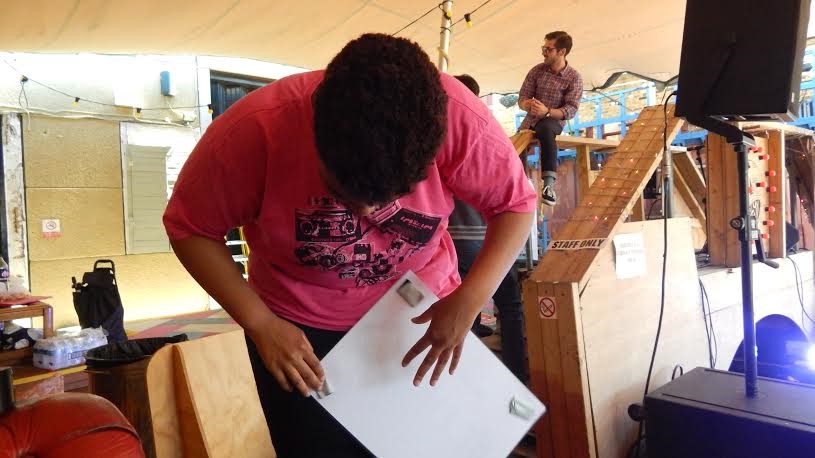 So the 19th is here, the day we’ve all been waiting for. Our call time to arrive at the venue was 9am, and let me just add, this was the hottest day of the year so far at 35 degrees! There was limited stress or complaints even though it was baking hot, we all came to work. By this time I think everyone was ready to execute the event and relax for days after…

The first thing we did was get settled and recap what had been discussed in terms of last minute changes, delivery times and the design of the venue. We then created a list - prioritising what to do first.

First up was blowing up balloons and decorating the place with fabric. If you came along you will have seen a cute river filled with balloons - that was us. Before getting light headed, some of us also started helping with the fabric plaiting and pairing. We then moved on to sticking signage around the venue and in the Tottenham Hale area to assist the guests in finding our venue.

The set up continued with the tech team setting up the lights/sound, artist liason team sorting out the green room for the artists before sound check began, marketing doing last minute reminders and updates on social media, and design working on their games/photobooth decoration. 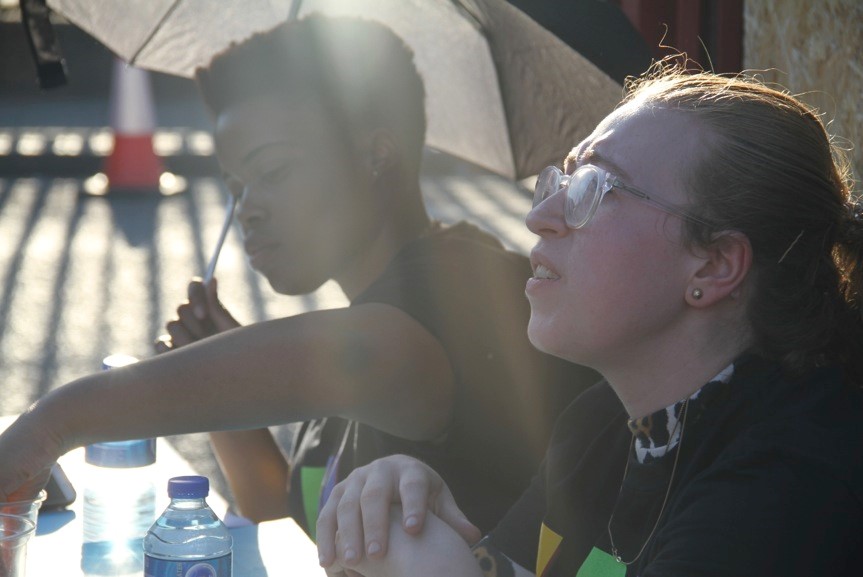 The summer jam began at 7:00pm with an introduction from our host, Yasmin Sabih. People started rolling in from 6:15pm, which meant a bit of rushing, and I ending up at the sign-up table a bit flustered.

First up was Kirsty Louise with her beautiful R’n’B sound. Next was J Lavaly who stole the crowd’s heart with his ‘Ordinary People’ cover by John Legend, and ‘Timmy Turner’ teaser by rapper Desiigner. The crowd was in love with him, and I guess you could say he was in love with himself too - he was really working it! We had a taste of spoken word and electro sounds after this to keep things versatile.

Between the first few acts, there was a debate about the EU referendum, which I must say completely changed the atmosphere, but people still got involved.

Did I mention the group had officially graduated too? Louise stopped us all in our tracks at this moment to embarrassingly invite us on stage and give us the certificates for finishing the course. It was a beautiful moment with everyone supporting and applauding.

Drinks continued flowing and singer BVKVRE and rapper Fred Fredas were next up, ending with grime lyricist Eklipse; all crowd favourites that got everyone reacting.

The night was done at 11pm, with some of the crew and attendees ending the in formation dancing to Cameo’s “Candy” - unfortunately after that it was time to go as stage manager Keisi said so!

The feedback after the event was the most overwhelming thing for my teammates and I. We were in such good spirits and full of joy at the end! We did it! I’d say the word of the day was ‘good vibes’ cause this was used many times to describe LDNXY, and it was true. The event was full of good vibes. No fuss, no fights.

I’d like to say this has motivated us to want to continue with what we’ve created. Everyone from the artists, to the tutors, mentors and attendees had nothing but good things to say about LDNXY, some even anticipating “the next event.”

At this moment, the team are in talks on moving it forward and seeing what we can do with LDNXY. Even if we decide not to do anything for now, it was a very interesting learning experience and I think I can speak for everyone when I say that.